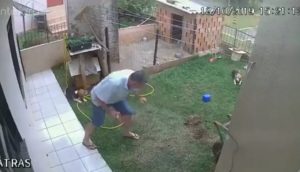 A man in Brazil turned part of his backyard upside down in a misguided attempt to kill some bugs.

“My wife complained that there were a lot of roaches invading our garden,” Cesar Schmitz told FocusOn News, according to the New York Post. “She is scared of them and begged me to destroy their nest under the ground once and for all.”
Schmitz poured some gasoline into the hole, then started tossing matches into it. Nothing happened at first. But after a couple of false starts, the backyard went boom!
Naturally, the internet has already given the moment the remix treatment:

I just felt like this was missing something… pic.twitter.com/MV7vU4jxa6

Saxon is a prolific writer with passion for the unusual. I believe the bizarre world is always exciting so keeping you up to date with such stories is my pleasure
Previous California middle school students receive student ID cards with sex hotline number
Next Australia’s Chris the sheep, the world’s woolliest, dies