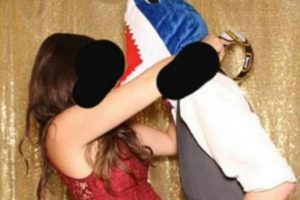 A wedding photo booth allegedly captured a guest cheating on her date for day with another man.

The booth captured pictures of the woman first kissing her date in the white shirt – before later dressing up and kissing another man in a purple shirt.

According to a Reddit user, the DJ posted the incriminating images the day after the wedding – believed to be in America.

Alongside the images, the user wrote: “The girl in red came as a date with the shark head dude,’ she said of the woman and her original date.

They then added: “The purple shirt guy then made out with her in the photo booth and in front of his kids.” 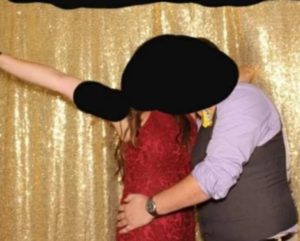 The woman in the red dress is seen wearing various fancy dress props as she kisses both men.

Many Reddit users commented on the thread, branding the behaviour “trashy”.

One user said: “It’s super trashy but I am loving that red dress.”

Later it emerged the wife of the second man to be kissed in the booth had allegedly uploaded the image also on social media. 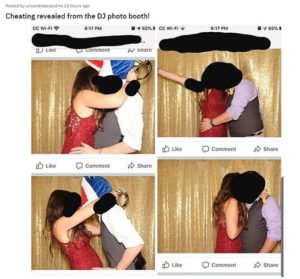 The original Reddit user who started the thread said: “His wife saw it and shared it on Facebook and I felt the same.”

Some felt sorry or the woman’s original date, referred to as Sharkboy because of his choice of prop.

Saxon is a prolific writer with passion for the unusual. I believe the bizarre world is always exciting so keeping you up to date with such stories is my pleasure
Previous Girl Suffering from “Sleeping Beauty” Syndrome Can Fall Into Deep Slumber for Up to Two Months at a Time, Mother Appeals for Assistance
Next California middle school students receive student ID cards with sex hotline number