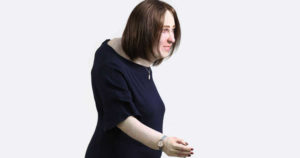 If you work in an office you should checkout this story to see what your colleagues will look like in the next 20 years.

We all know sitting at a desk for long periods of time has negative effects on our health, but if this life-size model of what an office worker could look like in 20 years is any indication, the future doesn’t look too bright.

Emma, as her creators have named her, doesn’t look so good. She has dry and red eyes from hours staring at a computer screen, a hunched back that makes you think she’s been ringing the bell at a recently burned down French cathedral, excess weight, swollen limbs due to poor circulation, and stress-caused eczema, among other alarming symptoms. Luckily, Emma is just a life-size doll created by a team of researchers led by behavioral futurist William Higham, but the world could be full of Emmas if we don’t do something to change the office environment and culture.

“Unless we make radical changes to our working lives, such as moving more, addressing our posture at our desks, taking regular walking breaks, or considering improving our workstation setup, our offices are going to make us very sick,” Higham told British journalists. 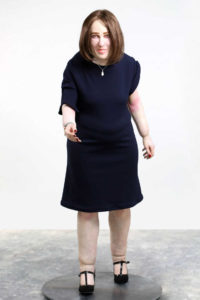 The researchers didn’t just make up Emma and her symptoms, they surveyed more than 3,000 office workers in France, Germany, and the UK, and learned that 50 per cent of them complained of strained eyes, 49 per cent of sore backs, 48 per cent of headaches, and 45 per cent of numb necks, among other symptoms blamed on their workspace. Based on this data, Higham and his colleagues created a model of what the average office worker might look like in 20 years if the workspace remains the same.

“The Work Colleague of the Future report shows that employers and workers really need to act now and address the problem of poor workplace health,” the English futurist said.

Emma is simply a life-size model created to show how the set up of a current workstation can lead to office workers physically and visually transforming, to cope with their office environment. According to the team behind the report, Emma is only 20 years away from becoming a grim reality.

It’s important to note that The Work Colleague of the Future report isn’t a peer-reviewed scientific study. It was commissioned by office furniture company Fellowes, who might be suspected of trying to promote its own line of office stations design to deal with the causes of Emma’s symptoms. Be that as it may, Emma offers an intriguing look at what modern office work might be doing to our bodies.

Saxon is a prolific writer with passion for the unusual. I believe the bizarre world is always exciting so keeping you up to date with such stories is my pleasure
Previous Australia’s Chris the sheep, the world’s woolliest, dies
Next World’s Scariest Haunted House Will Pay You $20,000 If You’re Brave Enough to Make It Through a Tour (Video)