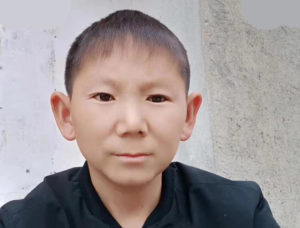 Having youthful looks is usually regarded as an enviable asset, but for a 34-year-old man in Central China, looking like a boy less than half his age is apparently a curse. He cannot get married, and everyone considers him a child.

For Zhu Shengkai,a 44-year-old man from a rural area in Xiantao City, Wuhan, troubles began at the age of 6, when he was hit in the head with a stone, while playing with the other children. There was no bleeding, but according to Zhu’s parents he had a fever for three days straight. Worried, they took him to a hospital, where doctors discovered a blood clot in his brain and performed emergency surgery to remove it. The boy recovered well and his life seemed normal for a few years after that, but at age 9 his family noticed that Zhu looked undeveloped compared to other boys his age. In fact, he looked like he hadn’t grown at all since his accident

Zhu’s parents took him to a regional hospital for a checkup, hoping to find out why his growth had stagnated, and after a series of tests they were told that the boy’s pituitary gland had been damaged, which had in turn affected his  physical development. Unfortunately, after more than two decades, 34-year-old Zhu Shngkai still looks like a young boy, he has no facial hair and his voice is that of a child as well. Not only does he have to constantly convince strangers that he is an adult, but because his body has not fully matured, he is not able to get married and have children like most of the boys he grew up with.

“Although I am 34 years old now, my body’s functions are the same as those of a young child,” Zhu said. “I am not really an adult, so I can’t get married.”

There is nothing Zhu Shengkai can do about his situations, and doctors don’t seem able to help either, but he is still optimistic. he has opened a barbershop to support himself, and he is even able to joke about his “curse”: “While all my friends will one day be old and wrinkled, I will be forever young with this innocent, baby face.”

Saxon is a prolific writer with passion for the unusual. I believe the bizarre world is always exciting so keeping you up to date with such stories is my pleasure
Previous ‘I’m a Unicorn’: Weather Reporter’s Bizarre Halloween Costume at Work Leaves Co-Anchor in Splits (Video)
Next Man Dies Trying to Eat 50 Boiled Eggs for Stupid Bet