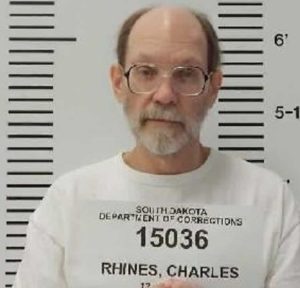 The cruel last words of a killer executed for murdering a doughnut shop co-worker have been revealed.

Charles Rhines, 63, from South Dakota, US, told the parents of his victim Donnivan Schaeffer, 22, that he ‘forgave’ them for their ‘anger and hatred’ towards him.

He was executed at the South Dakota State Penitentiary, in Sioux Falls, at 7.39pm local time last night.
Speaking just before his execution, Rhines reportedly said: “Ed and Peggy Schaeffer, I forgive you for your anger and hatred toward me.

“I pray to God that he forgives you for your anger and hatred toward me. Thanks to my team. I love you all, goodbye. Let’s go. That’s all I have to say. Goodbye.”

The victim’s mum told a press conference last night: “Today do something kind for someone in honor (of Donnivan)… he is loved and missed and will never be forgotten.
“We will miss him, and have missed him for so long.”
She described her son as ‘the boy with a goofy, contagious laugh’ who would have been a great asset to society.

The mother added that last night’s execution marked ‘relief and justice’.
Mr Schaeffer’s fiancée, who witnessed the murderer’s death, added: “This closes the book on Rhines, but we will forever feel the pain and emotion.”

The US Supreme Court had denied three 11th-hour petitions for stays of Rhines’ execution.
The murderer’s last meal request was fried chicken, the fruit cantaloupe or musk melon and the Norwegian flatbread lefsa.

The murderer believed he was targeted by an anti-gay bias as testimony showed some jury thought it would be better for him to die than to co-habit with another man.

One juror, Harry Keeney, told Rhines’ legal team: “We also knew that he was a homosexual and thought that he shouldn’t be able to spend life with men in prison.”

Saxon is a prolific writer with passion for the unusual. I believe the bizarre world is always exciting so keeping you up to date with such stories is my pleasure
Previous Mum promotes inclusivity with picture of son holding ‘Men Have Periods Too’ sign
Next Chinese Bosses Wash Employees’ Feet to Thank Them for Working Hard (Video)