A man has had a 12cm-long flesh-eating tapeworm removed from his head which had been slowly eating his brain for the past 15 years.

Wang Lei first started to feel numbness down his left side in 2007, and has continued to suffer with fail health ever since.He has seen multiple specialists and was once treated for a malignant brain tumour, as doctors tried to figure the cause of his issues.

But the young man’s condition continued to worsen and he started to suffer frequent seizures and blackouts, according to local media. 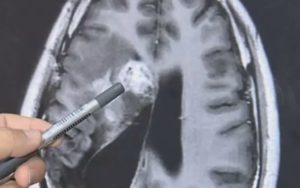 In 2018, doctors discovered that a tapeworm was living in his brain and they advised the patient to undergo non-surgical treatment as the parasite was considered to be in a risky area to operate on.
Unfortunately, the tapeworm continued to live in Mr Wang’s head and he recently underwent an operation at the Guangdong Sanjiu Brain Hospital to remove it.

Following the two-hour procedure, medics removed a Sparganum mansoni parasite commonly found in the intestines of cats and dogs, but rarely in people, according to reports.
Doctor Gu told local media: “The surgery was risky. 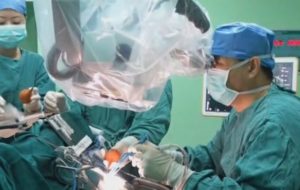 “The live tapeworm was moving in his brain and we had to remove all of it otherwise the leftover part could grow again.
“It is not the only case, our hospital has treated four patients this year.
“People should be careful when cooking frogs, snails and snakes which need to be cooked thoroughly.

“Also, do not drink water in the wild unless it has been boiled.”

Mr Wang, from the city of Guangzhou in the south-eastern Chinese, is now recovering from surgery.

Saxon is a prolific writer with passion for the unusual. I believe the bizarre world is always exciting so keeping you up to date with such stories is my pleasure
Previous Viral Video! Clever dog helps owner working on his six-pack (Watch Viral Video)
Next Mum promotes inclusivity with picture of son holding ‘Men Have Periods Too’ sign