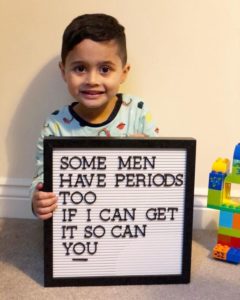 saying “Men Have Periods Too” in order to promote inclusivity.

Milly Bhaskara has amassed thousands of followers on Instagram through her posts that promote self-love, body acceptance and mental health awareness and her latest post features her son Eli.

The sign held up by the four-year-old says: “Some men have periods to. If I can get it so can you.”

Milly, who lives in Hull, explains in her caption why she has made the post.

She said: “Some men have periods.. Some non-binary people have periods. Some women have periods.
“Eli has been told about periods since he saw blood on my pants a couple of years ago (I no longer have them now and tbh it is shit when it’s seen as like the ultimate feminine superpower because I’m still a woman so).

“I didn’t use the language of women have periods because it’s not entirely inclusive.
“I told him that some women, some non binary people and some men have periods.

“Trans men may have ‘female’ sex organs and still experience periods and some non binary people have periods too therefore removing a female logo off the front of sanitary products helps include us all isn’t that wholesome and a nice gesture?

“It’s not insulting to women, it’s not discrediting women, it’s opening up the community to make it a safe space for those who don’t identify as women but still have periods.”
She turned off the comments section on Instagram but the post has been liked 6,000 times.

One person wrote: “Wow…wtf! Confuse the kid why don’t ya!”

While a third person commented: “Now this is too far lol the world is broken.”

Milly’s post comes after Always removed the female symbol from its packaging for sanitary products.

It said in a statement: “We’re also committed to diversity and inclusion and are on a continual journey to understand the needs of all of our consumers.”

Saxon is a prolific writer with passion for the unusual. I believe the bizarre world is always exciting so keeping you up to date with such stories is my pleasure
Previous Man has 12cm flesh-eating tapeworm removed which had ‘eaten his brain’ for 15 years
Next Cruel last words of killer executed for doughnut shop murder to victim’s parents