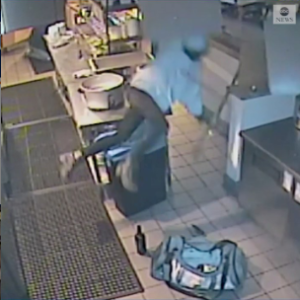 A burglar fell through the ceiling of a California restaurant after breaking in to steal with a male accomplice and it was caught on surveillance footage.

Police are seeking the public’s assistance in identifying two burglars who broke into an Ojai restaurant and stole hundreds of dollars and several bottles of wine on Oct. 31, 2019.

Footage released by the Ventura County Sheriff’s Office shows the suspects, described as a male between 20 and 25 years old and a female between 18 and 25, in the restaurant.

At one point, the female is seen crashing through a ceiling, striking a metal food prep counter before she hits the floor. She appears to be hurt by the impact and is slow to stand up.

According to police, several hundred dollars and numerous bottles of wine were stolen from the restaurant, Bowls and Brews.

Surveillance video captured the moment a woman fell through the ceiling during a burglary at a California restaurant. Authorities are searching for two suspects who allegedly stole hundreds of dollars and several bottles of wine. https://abcn.ws/2oXQ14V

Saxon is a prolific writer with passion for the unusual. I believe the bizarre world is always exciting so keeping you up to date with such stories is my pleasure
Previous Doctors Remove Screwdriver From Man’s Rectum (Unbelievable Photos)
Next Man beheads his estranged wife, slits 5-year-old daughter’s throat, then hangs himself