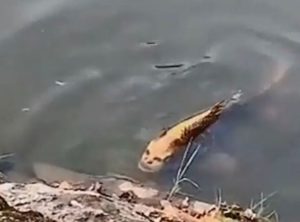 A visitor to a village outside the city of Kunming in south China captured a video of the creepy carp.

The video was shared on Weibo, a Chinese social media platform and in the clip the fish can be seen swimming to the edge of the lake and poking its head above the surface of the water.

On the fish’s head are dark dots which look like two eyes, two vertical lines which resemble the sides of a nose and one horizontal one underneath where a mouth would be. 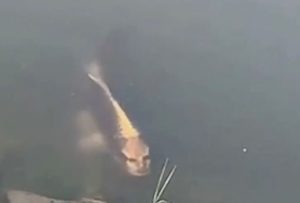 During the clip a woman can be heard saying: “The fish has turned into a fairy.”

People were understandably freaked out by the sight.

One person commented: “This is scary.”

Another replied: “Who dares to eat it?”

The video was later shared on Twitter by a user called @Unexplained where it creeped out more people.

Someone else wrote: “I am so freaked out right now.”

Others compared the fish to Voldemort, an alien and the animated fish from the 2004 film Shark Tale.

Saxon is a prolific writer with passion for the unusual. I believe the bizarre world is always exciting so keeping you up to date with such stories is my pleasure
Previous Nigerian Man Buried With His Bet9ja Coupons That Resulted To His Untimely Death (Photo)
Next University offers students grave to lie in to cope with exam stress