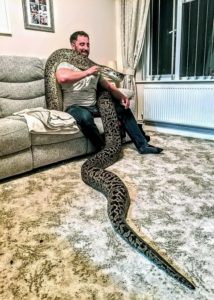 Anyone going round for a cuppa at this semi-detached house in Gloucester had better not have a fear of snakes.

Marcus Hobbs, 31, lives there with his two young sons and partner Amy – as well as their 18ft Burmese python called Hexxie. The animal is usually curled up in the living room, aside from when it’s feeding time and she eats rabbits, stillborn deer, calves, goats and pigs supplied by local farmers.

IT worker Marcus bought Hexxie from a pet shop eight years ago when she was just eight inches long. Since then, she has grown to weigh 17 stone and needs several people to lift her. She could squeeze a human to death, but Marcus is confident she will never strike – although he doesn’t handle her when the his sons, aged four and one, are nearby. Marcus Hobbs with partner Amy Leach, sons Benjamin and Joseph. 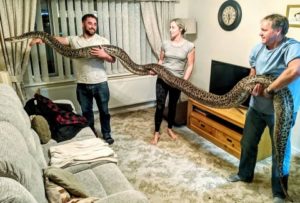 He believes she could even be a record holder for the world’s longest Burmese python. The largest ever measured was 18.8ft, but Marcus says last time he checked Hexxie was already 18ft, and since then she has grown. He’s reluctant to anaesthetise her for the official measurement until she’s stopped growing.

Marcus, of Tewkesbury, said: ‘I think people are so scared of them because they think they are going to kill them but if people come around I can talk to them all day long about snakes to reassure them.

‘[But] I would not get her out with the boys around. I would only do it while they were in bed or another room.

‘I don’t think she’d be dangerous towards them but you have to use your common sense and I’m a responsible pet owner.’

Hexxie lives alongside another smaller snake, Monty, and the family dog Shiloh, a Husky. 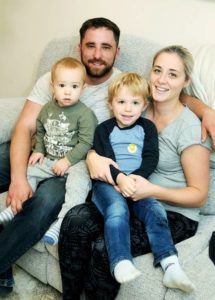 Marcus said both snakes have gone for him before – although not for a while. He added that the nearest Hexxie has come to attacking him was when he had to apply iodine to a skin infection.

He said: ‘She went for me. Not properly – more of a back off, get away type of thing. She’s nipped but she’s never latched on.

‘Her mouth is full of of hundreds of pin shaped teeth like fish hooks. If she gets hold of you, you cannot pull your hand out because all the teeth are going the wrong way.’

He has to get other people to help if he needs to move Hexxie whole. If she ever does start to coil around him, he knows how to peel her off tail first. His partner Amy, 31, who he met when they both worked at a hotel in Cheltenham, said she soon realised that it would be a case of ‘love me love my serpent’. 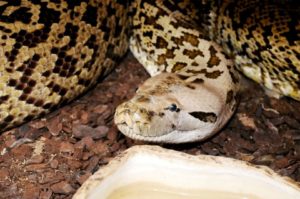 She said: ‘We worked together five or six years before then and he always had that reputation.

‘I was well aware they were part of his life… whether I liked it or not.’

Saxon is a prolific writer with passion for the unusual. I believe the bizarre world is always exciting so keeping you up to date with such stories is my pleasure
Previous Shocking moment a female teacher, 32, is caught on video brutally beating a 16-year-old special needs high school student and stomping on her head (Video)
Next Man discovers he is growing a tooth in his nose