Man discovers he is growing a tooth in his nose 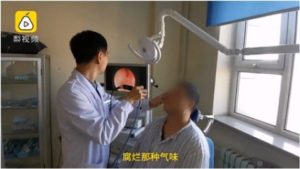 A man who went to hospital with a blocked nose was shocked to discover it’d been caused by a tooth growing in his nostril.

Zhang Binsheng, 30, decided to seek medical attention after struggling to breathe out of his nose for three months, Chinese media reports.
He told medics he had been struggling to sleep at night and also had a constant smell of ‘decay’ in his nostrils. They advised him to undergo an X-ray, in which they spotted a shadow of ‘high density’ at the back of his nasal cavity. Mr Zhang was then left stunned when medics explained they believed it to be his own long-missing tooth. 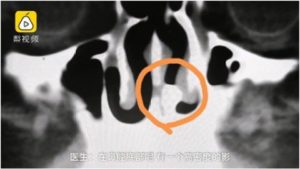 The tooth had been knocked out of his mouth when he fell from the third floor of a mall at the age of 10, and had somehow managed to root and grow in his nose. 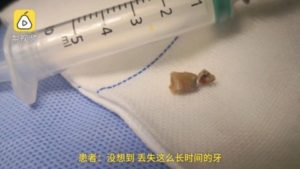 Doctor Guo Longmei, at the Fourth Affiliated Hospital of Harbin Medical University, in Harbin, China, said because the tooth was Mr Zhang’s, his nose had not rejected it as a ‘foreign object’. The tooth, which measured 1cm, was removed from Mr Zhang’s nose during a 30-minute surgery last week. He is now said to be recovering well. Having a tooth growing in your nose is considered to be rare, with less than 0.1% of the population likely to be affected.
Known professionally as a intranasal retained tooth, it can also be caused by physical damage to the face, or developmental problems. There have been 23 recorded incidents of the odd condition recorded in medical journals between between 1959 and 2008, experts have claimed.

Saxon is a prolific writer with passion for the unusual. I believe the bizarre world is always exciting so keeping you up to date with such stories is my pleasure
Previous Dad keeps 18ft python in his three-bedroom apartment where he lives with wife and two sons
Next Fidelity Bank Owerri Customers Cry For help, Storm Banking Hall (Video)