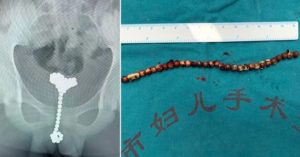 These are the 31 magnetic balls that were inside a 12-year-old boy’s bladder after he got them stuck up his penis.

The child said he forced them up there while ‘exploring his anatomy’ and was rushed to hospital two months later after experiencing severe abdominal pains.

Buckyballs are popular toys sold in the form of metal spheres, which can be stacked into any shape. Urologist Doctor Wang Jun said the pieces were ‘very difficult to retrieve’ due to their magnetic properties.

He said: ‘They tend to slip when trying to grasp them, or they form a large ball-shaped cluster.’

At first it was not immediately clear to medics what was causing the young patient’s abdominal pains.

Dr Wang said: ‘It didn’t appear to us to be a gastrointestinal problem, so we pulled him aside and asked him.

‘He admitted that, about 70 days earlier, he inserted Buckyballs into his urethra.’

In the end doctors had to fill the boy’s bladder with air to make it easier to locate and grab the Buckyballs, avoiding the need for more invasive surgery.

The boy, from Wuhan, capital of China’s Hubei Province, is expected to make a full recovery.

Saxon is a prolific writer with passion for the unusual. I believe the bizarre world is always exciting so keeping you up to date with such stories is my pleasure
Previous Thousands of South Koreans Fake Their Funerals to Improve Their Lives
Next Video: Hilarious moment model gets ‘groped’ by an elephant