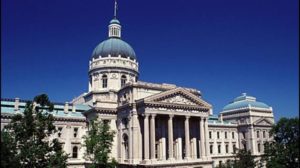 Hours before they were to attend an educational conference in Indianapolis, three judges went out drinking for a few hours and decided to walk to a strip joint.

Finding that closed, they then stopped at a White Castle, where two men in an SUV shouted at the judicial trio, prompting one judge to hold up her middle finger at the two men, according to an Indiana Supreme Court disciplinary ruling.

A drunken brawl then erupted between the men and two of the jurists, who were shot and seriously wounded in an unseemly spectacle that resulted in the Indiana Supreme Court temporarily suspending them without pay this week for their less-than-honorable actions early in the morning of May 1.

“Respondents’ actions were not merely embarrassing on a personal level; they discredited the entire Indiana judiciary,” the state Supreme Court said its Tuesday ruling.

An attorney for Adams declined to comment to CNN on the case. In a statement to local media, Adams apologized to his family and community, acknowledging he had “failed to behave in a manner that my position requires,” the Indianapolis Star reported.

“I am fully aware of the embarrassment I have brought to the Indiana Judiciary, my family and specifically my community. There is not a minute in the day that I don’t think about the significant repercussions my actions have caused. I take full responsibility for my actions as they neither met my expectations or the expectations placed upon me as a judicial office,” Adams said in the statement, according to the Star.

Adams, Bell and Jacobs arrived in Indianapolis for the Spring Judicial College on April 30 and began socializing and drinking with other judicial officers that evening, the ruling said.

At around 3 a.m. the next morning, the judges walked together to a strip club, the document said. But the club was closed and they walked to a nearby White Castle restaurant.

While they were standing outside in the White Castle parking lot, two men drove by and shouted something at the three judges out of the window of their vehicle. Bell flipped off the men, the document said, and they pulled into the lot and the five began to argue.

The ruling said Bell was intoxicated at the time and had no memory of the incident or what was said to incite it.

But it noted that she told detectives at the scene, “I feel like this is all my fault.”

Bell said the three were good friends and the other judges were protective of her, the ruling said.

She added, “I’m not denying that I said something or egged it on … because I drink … I mean I fully acknowledge that I drink and get mouthy, and I’m fiery and I’m feisty, but if I would have ever thought for a second that they were gonna fight or that that guy had a gun on him, I would never, never.”

The verbal argument turned physical, with Jacobs bringing one of the men to the ground and Adams kicking him in the back.

The fight ended when the man pulled out a gun, shooting Adams once and Jacobs twice, the document said. The men were taken to local hospitals and underwent emergency surgeries.

On September 9, Adams pleaded guilty to a misdemeanor charge of battery resulting in bodily injury. He was sentenced to 365 days in jail, with 363 days suspended.

The Indiana Supreme Court ruled that by engaging in the conflict, the judges fell short of their directive to “aspire at all times to conduct that ensures the greatest possible public confidence in their independence, impartiality, integrity, and competence.”

The man accused of shooting the judges is scheduled to go on trial in January on a number of charges, including felony aggravated battery.

Saxon is a prolific writer with passion for the unusual. I believe the bizarre world is always exciting so keeping you up to date with such stories is my pleasure
Previous Texas woman legally declared dead while still alive
Next Child Genius Set to Graduate from University at Age 9, with degree in Electrical Engineering (video)