See Cat With 2 Heads Rejected by Her Mum (Video) 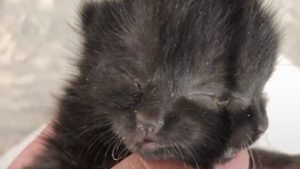 This is really one of the wackiest stories you might be coming across in recent times. You might have heard “cat with nine lives” not two faces. Well, this particular cat was born with two faces and has since gone viral online.

Duo, as this cat is called, was born three months ago but was rejected by her mother. Luckily, the mother cat’s owner was friends with a veterinarian, Ralph Tran, who agreed to adopt this special needs cat and give her the necessary love and medical care.

“Raising Duo has been an incredibly rewarding experience, and at the same time, incredibly challenging,” Tran told InsideEdition.com.

At first, Tran fed Duo with a tube and a syringe. But she has since learned to eat on her own,

“Both her mouths meow separately, and both noses are fully functional,” Tran told People.

However, she is not particularly adept yet, Tran admitted on a Duo’s Facebook page.

“Each face fights to eat and, as a result, most of the food just ends up in the middle eye and on her forehead. That’s why her forehead is now bald,” Tran wrote.

Duo has had other issues as well, including a respiratory infection, a possible seizure and issues with walking. In addition, she will likely need surgery on her middle eyes.

She is also smaller than other kittens her age, but that doesn’t stop her, he said.

Although most “Janus cats,” as Duo is called, rarely live beyond a few days, her condition isn’t necessarily fatal.

Saxon is a prolific writer with passion for the unusual. I believe the bizarre world is always exciting so keeping you up to date with such stories is my pleasure
Previous Someone keeps leaving cash bundles of £2,000 around a village
Next Japanese City Where Water in Drainage Channels is so Pure that Beautiful Koi Fish Swim in it (Video)