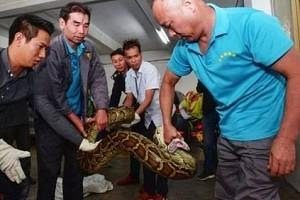 A shocking that went viral has shown moments a giant python fell through the ceiling of a spa in China after allegedly living there for 10 years.
The incident took place on November 12, in the Chancheng District of Foshan, southern China’s Guandong Province. The snake which weighed nearly 20 kgs fell through the ceiling after a staff was said to have heard noise and movement in there.

Daily Mail reports that an employee at the spa heard a loud noise and saw the huge reptile fall through the ceiling. The employee immediately called the police for help. The spa employee was inspecting the rooms and was shocked to see the long python slithering on the spa floor.

The owner of the spa also claims that he had heard of such a snake living in the ceiling walls a decade ago, the Daily Mail further reported. 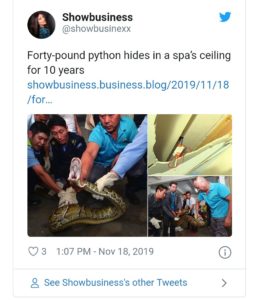 Three years ago, when the spa was under construction workers had complained of seeing a huge snake but none took it serious. It was only after the snake finally revealed itself to the public that the employees got worried.

The police arrived and the snake was removed from the premises. It was later given to a zoo.

Saxon is a prolific writer with passion for the unusual. I believe the bizarre world is always exciting so keeping you up to date with such stories is my pleasure
Previous Angelababy! Most Expensive Wedding Gown in the World Cost Over N800 Million
Next Artefact telling story of Noah’s Ark suggests ‘fake news’ has been around for 3,000 years