Home / Uncategorized / Artefact telling story of Noah’s Ark suggests ‘fake news’ has been around for 3,000 years

Artefact telling story of Noah’s Ark suggests ‘fake news’ has been around for 3,000 years 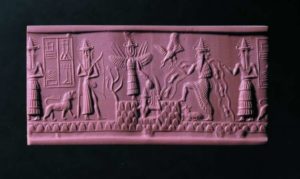 The art of tricking readers into misinterpreting language can now be dated back some 3,000 years after new research into a Babylonian version of the story of Noah’s Ark.

A study of a clay tablet discovered in the 19th century in present-day Iraq has found its writers deployed a pre-historic version of “fake news” by providing multiple meanings of the same words when telling the story of a flood.

Nine lines etched into the Flood Tablet, held by the British Museum, suggest that a Babylonian god – Ea – promised a flood of food to Uta-napishti, the pre-Biblical version of Noah, in return for building an ark.

But work by Dr Martin Worthington, a specialist in early Middle Eastern civilisations at St John’s College, Cambridge, has found the language, part of the Epic of Gilgamesh, contains several phonetically-identical alternative – and more sobering – meanings.

‘Manipulation of information and language’
Dr Worthington said: “While Ea’s message seems to promise a rain of food, its hidden meaning warns of the flood. Once the ark is built, Uta-napishti and his family clamber aboard and survive with a menagerie of animals. Everyone else drowns.

“The manipulation of information and language has begun. It may be the earliest ever example of fake news.”
The Babylonian story, which is widely believed by scholars to have inspired the Biblical tale of Noah, contains lines which can be positively interpreted Ea saying: “At dawn there will be… cakes/ In the evening he will rain down upon you a shower of wheat.”

Second meanings
But Dr Worthington has uncovered a series of second meanings in the words of a language which has not been spoken for two millennia.

One of the new interpretations is: “By means of incantations/By means of wind-demons, he will rain down upon you rain as thick as [grains of] wheat.”

Saxon is a prolific writer with passion for the unusual. I believe the bizarre world is always exciting so keeping you up to date with such stories is my pleasure
Previous Giant python crashes through office ceiling in China after living there for 10 years (Watch Video)
Next North Carolina Man Creates Dating App in Which Women Can Only Match With Him