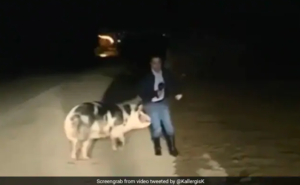 A regular work day turned into one that reporter Lazos Mantikos probably won’t forget in a hurry when a pig hogged his limelight. Mr Mantikos, a reporter for ANT1 TV’s Good Morning Greece, was delivering a report on Tuesday when he was chased by the pig on live TV, reports CNN. The incident occurred when the Greek reporter was in the town of Kineta to report on flood damage.

Hilarious footage of the incident shows Mr Mantikos being pursued relentlessly by the pig as he attempts to complete his report.

“Good morning, we have an issue. Giorgos can you hear me,” Mr Mantikos says in the footage, addressing studio journalist Giorgos Papadakis, according to a translation by CNN. “We have a pig here that has been chasing us since this morning … folks sorry I can’t stand because it’s biting me.”

Back at the studio, Mr Mantikos’ colleagues can be seen trying to control their laughter.

The video has collected over 1.3 lakh views on Twitter, along with a ton of amused comments.

Mr Mantikos’ colleague was among those who couldn’t resist cracking jokes at his expense. “Lazos, because it’s a tragic issue and we are counting our wounds in Kineta, try and work things out with the female pig,” Mr Papadakis said to laughter in the studio.

Saxon is a prolific writer with passion for the unusual. I believe the bizarre world is always exciting so keeping you up to date with such stories is my pleasure
Previous Customers Gift Car To Waitress Who Had To Walk 22 Km To Work Every Day
Next Ten Most Expensive Funerals in the World