Home / Uncategorized / Ten Most Expensive Funerals in the World

Ten Most Expensive Funerals in the World

Funeral is a time of saying good bye to a loved one or friend. It is expected to be a sad moment but these days some engage in what is called celebration of life which looks nothing like a sad moment but all about fanfare. Whatever the approach may be, the fact is that funerals are the painful goodbye moments. Some people actually spend so much just to give a last goodbye to their beloved ones.  In some instances, millions of dollars have been spent to bid farewell to a loved one. Many celebrities have enjoyed the most expensive funerals in the world till date. Here is a list of top ten most expensive funerals the world has ever witnessed. Of course, celebrities and top political office holders were involved. Checkout this list; 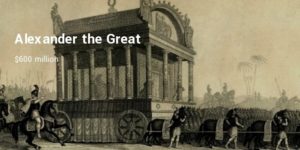 You can imagine an event that took place in the ancient times thousands of years ago still maintaining the number one spot. It must have been truly grand. Alexander the Great who presided over the largest empire in the world from the Ionian Sea to the Himalayas enjoyed the most expensive funeral till date. He passed away in 323 BC and was placed in Gold Casket and transported in a gold carriage pulled by 60 horses. 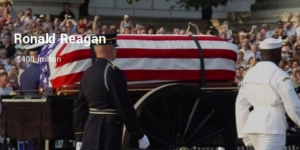 Ronald Reagan was the President of US from 1980-1988 and he led an arms race against the Soviet Union reducing. He died in 2004 and was given one of the top most expensive funerals the world has ever seen. Reagan’s funeral cost $400 million.

The supreme leader of North Korea from 1994-2011, was given a very expensive funeral. Government spent massive amounts changing the signs in the Towers of Eternal Life. Among the activities that took a huge chunk of the expenses was the fact that millions of dollars were also spent to bring in Russian embalmers and buy a special glass casket. Kim Jung Il was a revered leader so his people believe he deserved every dime spent on his funeral. 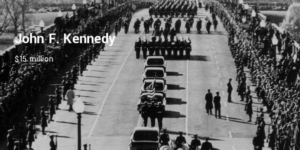 John F. Kennedy was among the most popular US Presidents across the world. He was also loved by many admirers around the world. He was killed by an assassin in 1963, which shook the entire world. His burial plot in Arlington National Cemetery which costs $15 million was the expensive funeral. 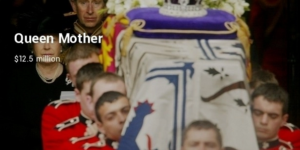 The Queen Mother passed away in 2002. She was given ceremonial funeral in Westminster Abbey. Though the total amount wasn’t revealed, the total cost was $12.5 million.

Pope John Paul II was the second-longest serving pope in history, heading the Catholic Church from 1978 to 2005. He was credited for his influence in helping to end communism in his native Poland and for improving ties with other religions. When he died in 2005, even belligerent countries like North Korea and Cuba sent their condolences. It was the largest gathering of heads of state in history, with four kings, five queens, 70 presidents and prime ministers and 14 leaders of other religions attending. 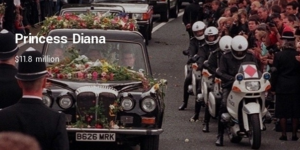 Princess Diana was the ex-wife of the Prince of Wales. He death was shrouded in controversies and that perception has remained till date. When she passed away in 1997, the royal family initially refused to let flags fly at half mast, causing a huge public outcry. However, she was honoured with an expensive burial to show she was actually loved. Admired for her glamour and class, she cut a lonely figure amidst the trappings of royalty. She was given a ceremonial funeral that cost $7.7 million back then, or $11.8 million today. 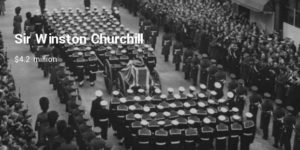 Sir Winston Churchill was the Prime Minister of the United Kingdom from 1940 to 1945 and 1951 to 1955. Churchill was also a very popular world leader in his time. He was also an accomplished writer, having won the Nobel Prize for Literature. He was also the first honorary citizen of the United States. He inspired Britain during the dark days of World War II and helped defeat Hitler and Nazi Germany. When he died in 1965, he was given a state funeral usually reserved for royalty. It was one of the largest gatherings of statesmen in the world ever. It then cost around $258,000, which is about $4.2 million today. 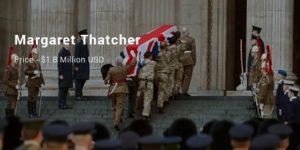 The lavish reception, reported to cost $1.8 million, featured fountains of vintage pink champagne for 700 guests. Margaret Thatcher was the Prime Minister of the United Kingdom from 1979 to 1990. Though she was a polarizing figure domestically back then because of her conservative policies, she did help stare down the communist Iron Curtain towards the end of the Cold War. After she died in April 2013 due to a stroke, her funeral was paid for by her estate and by taxpayers. These include security and police expenses for $1.4 million, $104,000 for St. Paul’s Cathedral and $31,000 for the London Ambulance Service. 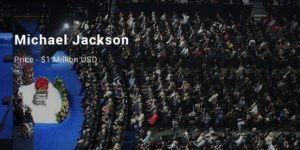 Michael Jackson’s private funeral cost his estate more than $1 million, according to court documents released in November 2009. How did the event get to this price? Jackson’s final resting place, a crypt at Forest Lawn’s Great Mausoleum, cost $590,000 alone, while invitations to the King of Pop’s funeral cost $11,000. The crypt was in a celebrity-studded Glendale mausoleum. Also, $35,000 was spent on clothes the singer wore on that day of burial.

According to his attorney, Howard Weitzman, “It was Michael Jackson. He was bigger than life when he was alive.” Weitzman said this shortly after the financial detail of the funeral were revealed. According to the Los Angeles Times, other factors contributing to the million dollar tab were $16,000 for the florist bill, $30,000 for security and the fleet of luxury cars, and $21,000 to the Italian restaurant that hosted the “funeral repast.”

This sounds crazy but a super star is involved so it’s actually not a big deal.

Tags Most Expensive Funerals in the World

Saxon is a prolific writer with passion for the unusual. I believe the bizarre world is always exciting so keeping you up to date with such stories is my pleasure
Previous News Reporter Chased By Pig On Live TV In Hilarious Video
Next King Of Sweden Arrives In Delhi Carrying His Own Bags, Viral Photo Wins Praises