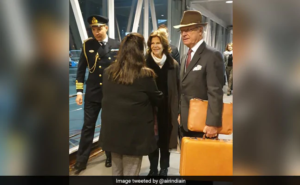 King Carl XVI Gustaf and Queen Silvia of Sweden arrived in Delhi this morning for a five-day visit. The royal couple flew in on an Air India plane from Stockholm, and the national carrier tweeted photos of them at the Delhi airport. Pics of the Swedish royal couple immediately went viral as people noticed that King Carl arrived carrying his own bags – a gesture that has won him a lot of praise on social media.

“His Majesty Carl Gustaf Folke Hubertus , King of Sweden and Her Majesty Silvia Renate Sommerlath travelled AI168 Stockholm to Delhi,” wrote Air India on Twitter, sharing two pics of the royals being greeted at the airport.

The king of Sweden has been widely praised on Twitter for carrying his own bags at the airport – an action praised as “inspiring” and “humbling” by many.

Very very inspirational and humbling to see the King and Queen of Sweden carry their own bags on board. #Salute https://t.co/Qj7scmzJgQ

Twitter users also praised them for flying commercial instead of taking private jets.

The Swedish royal couple, who arrived here early this morning, were accorded a ceremonial reception at the Rashtrapati Bhavan. In Delhi, the King and Queen are scheduled to visit Jama Masjid, Red Fort and Gandhi Smriti on Monday. The King will also have a meeting with President Ram Nath Kovind on ways to further boost relations.

Apart from Delhi, the royal couple is scheduled to visit Mumbai and Uttarakhand.

Saxon is a prolific writer with passion for the unusual. I believe the bizarre world is always exciting so keeping you up to date with such stories is my pleasure
Previous Ten Most Expensive Funerals in the World
Next World’s Most Expensive Jacket Costs $2 Million