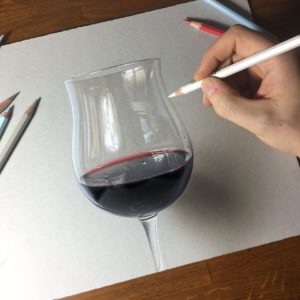 This artist is so good you would think whatever he has drawn is actually for real. He has taken art to a new hyper realistic level. Social media community is loving his work and today, with over two million followers he is among the most popular artistes in YouTube.

Italian artist Marcello Barenghi has a very special skill – he can draw hyper-realistic versions of everyday objects, using commons drawing tools to make them look three-dimensional.
Even as a child, Marcello Barenghi had a knack for hyper-realistic drawing, trying his hardest to imitate reality. At just 18 months he was drawing airplanes that had tridimensional moving propellers and vertical stabilizers, and as he grew up his skills only improved, winning him several drawing competitions. By the time he graduated high-school and started art school, Barenghi had developed his own hyper-realistic style and technique, but was advised by his art teachers to try his luck outside of Italy, where hyper-realism was more appreciated as an art form. However, making a career out of drawing realistic versions of everyday things proved harder than he imagined. 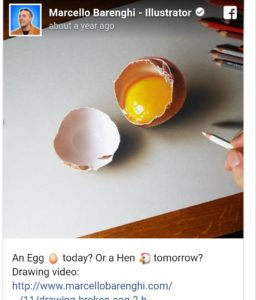 At the time that Marcello was in art school, the graphic design industry was seen as a threat, so instead of focusing on his passion, the talented artist decided to specialize in architecture. It didn’t turn out to be the best career choice, and after suffering several disappointments, Barenghi gave up on art altogether and got a job as a shop assistant. 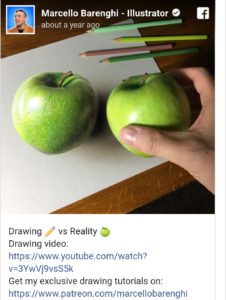 By the time 2013 rolled around, Marcello Barenghi found himself “unemployed and with nothing to lose”, so he decided to go back to the thing he liked to do the most – drawing hyper-realistic versions of everyday objects. He set up a YouTube account and started uploading video tutorials of himself drawing things like soda cans or fruits. In his first year as “youtuber”, Marcello got 100,000 followers. Today, he has 2.1 million subscribers, which makes him one of the most popular artists on YouTube.
Marcello spends several hours on a single project, which, truth be told, doesn’t seem like a lot, considering just how good his drawings look. One of the things that set him apart from most artists is that he doesn’t sell his artworks, ever. 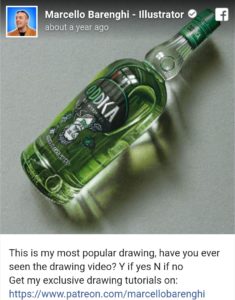 “Of each and every drawing I realized, I could say I’m not completely satisfied with it, but also that I love it so much I could never part with it. In fact, I don’t sell them,” Marcello Barenghi told American Express Essentials. “Every one of them is the result of a challenge which I loved to take on and overcome: the gold of the World Cup trophy, the transparency of the glass, the weave of fabric. I love them all, each of them has its own peculiarity.”

Saxon is a prolific writer with passion for the unusual. I believe the bizarre world is always exciting so keeping you up to date with such stories is my pleasure
Previous Meet Ranger, the 2-year-old Dwarf German Shepherd
Next Roger Federer Reveals How Many Pairs Of Shoes He Has