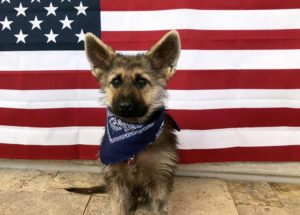 Some people love to see their puppies look as beautiful as they are for a long while but not in the manner of a particular dog which is still looking like a puppy even after two years.

Ranger, a popular German Shepherd, has become an internet sensation after his photos surfaced online and went viral. This was because some people thought he was a beautiful puppy not knowing that he was actually two years old but was suffering an ailment called pituitary dwarfism.

Ranger was diagnosed after an infection caused by a parasite called Giardia, and even though he has had to deal with several side effects, like shedding fur and flaky skin, he managed to get the right treatment and leads a normal life. Plus, being stuck in puppy-hood forever does have its perks, like thousands of adoring fans on social media and constant attention from passers-by. Ranger captures the hearts of most people that take a look at him, and judging by the photos below, is there any question why?
“When we originally got Ranger from the breeder, he was smaller than all his other littermates, but we figured that was because he had a parasite called Coccidia,” owner Shelby Mayo told Bored Panda. “In the weeks following, we took him home and he was parasite free but later on ended up getting a parasite called Giardia. At the same time, we also discovered that Ranger had a large infection on his neck. We were eventually able to get the infection under control, fast forward a few months later we were finally able to get rid of Giardia. 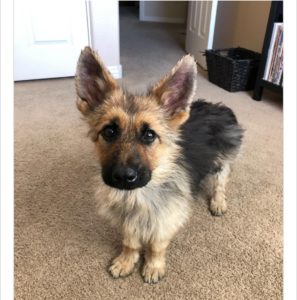 After recovering from the parasite infection, Ranger’s owners noticed that he wasn’t growing at the rate he was supposed to grow anymore, and soon a vet confirmed that he was suffering from dwarfism. That meant he was stuck in puppy form forever, and despite the negative side-effects, it opened the way to social media stardom.

The social media community is loving Ranger more and more as he now has over 100,000 followers on Instagram, many of whom complement his youthful looks daily and daydream of having their very own perennial puppy.

Saxon is a prolific writer with passion for the unusual. I believe the bizarre world is always exciting so keeping you up to date with such stories is my pleasure
Previous Farmer Paints His Dog Like a Tiger to Scare Away Invading Monkeys
Next Marcello Barenghi, superb artist who draws hyper realistic objects (Video)