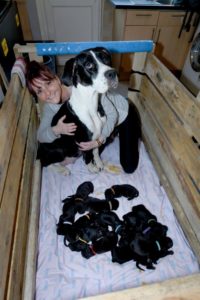 A British woman has gone viral over the feat achieved by her dog.

The woman said her dog may have broken a world record when she gave birth to a litter of 21 puppies.

Joanne Hine said her Great Dane/American bulldog mix, Mary Jane, was initially expected to deliver a litter of six to eight puppies, but the dog ended up having 21 babies when she went into labor Nov. 20.

The Guinness World Record for largest litter of puppies stands at 24, but Tia the Neapolitan mastiff gave birth in 2004 via Caesarean section and MJ gave birth naturally, leading Hine to wonder whether the litter could be its own world record.

“I’m so proud of her. MJ did it all on her own Annie and Ruth of Jane Callow Veterinary Practice by her side the whole time,” Hine told The Independent.

She said the 14 puppies that survived the birth require constant care and attention, since MJ doesn’t have enough nipples to nurse them all.

Saxon is a prolific writer with passion for the unusual. I believe the bizarre world is always exciting so keeping you up to date with such stories is my pleasure
Previous 10 Most Expensive Church Buildings in Nigeria
Next Dutch supermarket cancels requests for photos of staff wearing only underwear