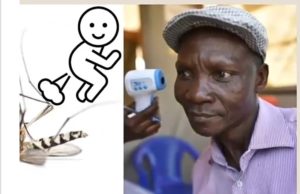 A Ugandan man whose farts can allegedly kill mosquitoes six meters away claims to have been offered deals by companies looking to turn his flatulence into commercial insect repellent.
Joe Rwamirama, a 48-year-old man from Kampala, in Uganda, says he eats ordinary food and that his farts smell no worse than anyone else’s, but to insects, like malaria-transmitting mosquitoes, the gas he passes is deadly. Joe’s insect-repelling farts are famous around town, and people know that whenever he is around, mosquitoes magically vanish. Some say that the man’s farts have evolved to fight mosquitoes.
“He is known all over the city as the man who can kill mosquitoes with his farts,” local barber James Yoweri told Talk of Najia. “When Joe is around we all know that mosquitoes will vanish. He is respectful of people around him and will only fart when there are mosquitoes around which bring malaria. His farts gets rid of this disease.”

“I heard about Joe’s gift and I took him in to help mop out the mosquitoes infesting our surroundings,” a local chief said. “He respectfully drops these bloomers and it helped eradicate the insects. He does his thing and they drop – like flies.”

Rwamirama, who does odd jobs for a living, went as far as to claim that his farts are strong enough to knock out insects in a six mile radius, which would make his fallout zone larger than that of the atomic bomb which destroyed Hiroshima in 1945.
“I smell like a normal man and I bathe daily and my farts are just like everyone else, they are only dangerous to small insects and especially mosquitoes,” Joe insists.

The Ugandan man now dreams of having his insect-killing farts turned into a commercially-available repellent. “Imagine buying a Raid can with my face on it!” he told reporters. However, the companies he claims already contacted him about it have yet to confirm his statements.

Saxon is a prolific writer with passion for the unusual. I believe the bizarre world is always exciting so keeping you up to date with such stories is my pleasure
Previous Woman Accidentally Swallows 30-Cm-Long “Vomiting Tube” Used to Lose Weight
Next Dog found with head stuck in wheel rim rescued