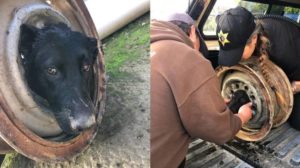 An officer on patrol found a dog stuck in a tough situation on Tuesday, and was quick to help.

The Fresno Humane Animal Services shared photos of the lab-mix pup, now named Rimsy, with her head stuck in a wheel rim to their Facebook.

The staff says Officer Hartman found Rimsy and carefully loaded her into the patrol car to bring her to the center where team members were able to free Rimsy from the rim.
Officials say Rimsy will soon be up for adoption if her owners don’t reclaim her.

Saxon is a prolific writer with passion for the unusual. I believe the bizarre world is always exciting so keeping you up to date with such stories is my pleasure
Previous Meet Joe Rwamirama: Ugandan Man Who Claims His Farts Can Kill Mosquitoes Six Meters Away
Next “Angry” Tortoise Nearly Burns Down House, Rescued