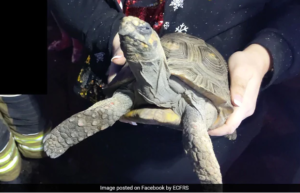 Tragedy was averted on Christmas day after a 45-year-old tortoise nearly burned down his owners’ house.

The tortoise was rescued from the blaze without any injuries. BBC reports that the incident occurred in Duton Hill, Essex, when the tortoise knocked a heat lamp on to its bedding, setting it alight.

Firefighters were called to the property after neighbours heard fire alarms and found the house filling up with smoke. The firefighters were able to extinguish the fire and rescue the tortoise within 25 minutes.

The Essex County Fire and Rescue Service later shared a photo of the unnamed tortoise on Facebook and wrote: “This 45 year old tortoise might look angry but it’s his lucky day. After he set his bedding alight his neighbour heard the smoke alarm and called us.”

“He does look a little annoyed that his dastardly plan has been foiled,” wrote one person in the comment section. “He looks very proud of himself!” said another.

According to Daily Mail, Gary Wain, watch manager at Great Dunmow Fire Station, said: “This incident shows just how important it is to have smoke alarms on every level of your home. Even if you’re not home they will alert anyone close by to the first sign of fire.

“This tortoise has had a very lucky Christmas Day – he is 45 years young and will now hopefully continue to live a long and happy life.”

Saxon is a prolific writer with passion for the unusual. I believe the bizarre world is always exciting so keeping you up to date with such stories is my pleasure
Previous Dog found with head stuck in wheel rim rescued
Next ‘Penis Fish’! Facts About This Weird Creature