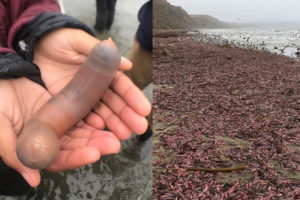 A lot of weird creatures exist in this world but there are some that actually there are some that are not just bizarre but hilarious, especially when you consider their name. One of such creatures is the ‘Penis Fish’. This animal which has been existing for a long while recently buzzed the internet after thousands of them washed up on the shore of a beach in Northern California, in the United States of America. This happened earlier in December, 2019, when several thousand wriggling penis fish washed up on the shore of Drakes Beach in Inverness, California. That was when so many people got to know about the existence of the ‘Penis Fish’ also called the Innkeeper worm. The photo, which biologist Ivan Parr admits may rightfully offend some viewers, shows “thousands of 10-inch wiggly pink sausages” strewn across the sand on Drakes Beach. Scientists say this is not a one-time occurrence; Penis fish have stormed shores before, and will surely wash up on the shores again. So what do you know about the ‘penis fish’? Here are some facts that will tell you more about this weird looking creatures that are special delicacies to some people. 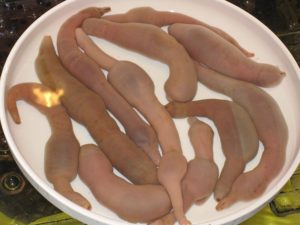 What is a penis fish?

The first thing you should know is that a penis fish is neither a penis nor a fish. Of course, it is probably obvious that this is not a genitalia, though you wouldn’t be faulted for making that mistake initially. This creature which is Urechis caupo is actually a species of spoon worm. They’re related to segmented worms like leeches and earthworms, but lost their body segments over the course of their evolution to become smooth in a way that is, frankly, unsettling. Their more polite common name is the “innkeeper worm,” due to their accidental altruism in creating tunnels that other critters can live in.

Where did the penis fish come from?

The penis fish dates back 300 million years, according to The New York Post. The species hangs out in the muddy sand of shallow waters that stretch from southern Oregon to northern Mexico, digging U-shaped burrows to squirm around in. One end of those burrows is often capped with blob of mucus, which the penis worm expels to act as a sort of net in which to catch plankton and other small food particles during high tide. The other end usually features a pile of poop, which the penis worm blasts out of the tunnel by shooting a jet of water out of its anus. A whole host of other tiny beach creatures find these accommodations quite agreeable, and eat any mucus-caught food particles that are too large for their hosts’ tastes. Unfortunately, strong storms have the power to evict the entire bunch of them by stirring up the muck, and that is how they get washed up on beaches. This is exactly what happened at Drakes Beach in December 2019.

Why is it called Penis Fish?

The creature for this name due to its shape. According to a report by Bay Nature, these creatures are marine worms and that are called “fat innkeeper worms.” However, colloquially, they are called exactly what they look lie: penis fish.

Where does the Penis Fish Live?

The penis fish lives underwater. The biologist from the Western Section of The Wildlife Society, Ivan Parr, who first spotted the creatures washed up at Drakes Beach says that the 10-inch creature typically lives underwater. They dig up holes in the Ocean floor to trap food. 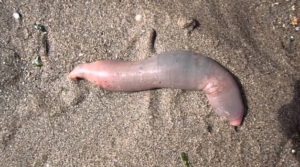 What does the Penis Fish Eat?

This is primarily due to their pattern of life and how they look for food. They dig U-shaped hole under water, forming tidal mudflats where they trap food they eat. According to The Sacramento Bee, the worms which are native to California usually remain underground and dig a “U-shaped” hole in the ocean floor to trap food, explaining their distinctive shape.

Is the Penis Fish Edible?

The answer is yes, people eat the penis fish. But just like virtually every other food, some people eat the penis fish while many others do not. It is in fact, a popular delicacy in Asia, especially in South Korea and China. Those who have eaten it say it is very sweet. An anonymous employee at The Post, who has eaten the worm in Shanghai, China, has described the taste as “a Livestrong band mated with a clam.” So you might have to satisfy your curiosity by trying it out yourself.

15 Facts You Should Know About the Penis Fish

1. They are neither penis nor fish

2. They are actually worms

3. This creature is called “gaebul” in Korea and this translates to “dog dick”; but in the United states it is called Innkeeper worm or penis fish.

6. They build burrows in tidal mudflats.

7. They are called ‘Penis Fish’ because of their shape

8. They are edible (though like most other delicacies, not everyone eats them)

9. The worms are considered useful as a very rich delicacy in South Korea
10. These ‘fishes’ are known to be very chewy and very sweet from marinating (soaking) in salt water for so long (Marination is the process of soaking foods in a seasoned, often acidic, liquid before cooking).

11. Koreans who love eating it describe the taste as a natural, mildly pleasant sweetness that you’ll often taste in seafood. They say it is very sweet.
12. The worms are sweetest and most plentiful from December to March. They are traditionally consumed raw after being dipped in sauce, usually chogochujan (vinegared gochujang). Similar to Oysters, they are meant to be cut up and eaten right away.
13. Not everybody eats them on the spot. Some koreans near the West Sea prefer to eat theirs with kimchi and others skewer ones are grilled with salt, pepper and sesame oil seasoning.

14. The Penis Fish has existed for 300 million years, according to The New York Post.

15. The Penis Fish is a species of marine spoon worm.

Saxon is a prolific writer with passion for the unusual. I believe the bizarre world is always exciting so keeping you up to date with such stories is my pleasure
Previous “Angry” Tortoise Nearly Burns Down House, Rescued
Next 15 Facts About the ‘Penis Fish’ You Should Know