This sounds wacky but a popular sex worker has joint the list of philanthropists raising funds for wildfire victimis in Australia
The lady on social media identified as Kaylen Ward, has been tagged an Angel after she used a ‘creative’ way to get people to donate money for the victims of wildfires in Australia.

Ms. Kaylen, a sex worker, offered to send her n* des to people who donate at least 10$ to fundraiser for the victims of wildfire in Australia.

“I’m sending n* des to every person who donates atleast $10 to any one of these fundraisers for the wildfires in Australia. Every $10 you donate = one nude picture from me to your DM. You must send me confirmation that you donated,” she tweeted.

Kaylen, whose social media followers has skyrocketed to over 40,000, was able to use her body to draw donations from around the world after her tweet goes viral with thousands of retweets.

As at the time of filing this report, the lady has been able to to raise over $60,000 (over twenty-one million naira) in 24 hours to the wildfire victims. 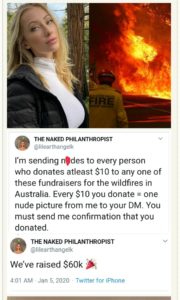 Social media is full of stories of community members offering generosity and support to devastated communities.

Australia is burning and being ravaged by the worst bushfire season the country has seen in decades.

The deadly wildfires, which have been raging since September, have already burned about 5 million hectares of land and destroyed more than 1,500 homes.

At least 23 people are dead, including at least three volunteer firefighters, and more are missing. More than 1,000 houses have been destroyed, hundreds more damaged. 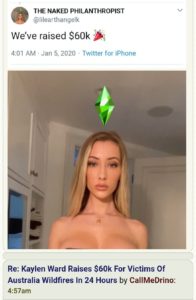 Mass evacuations are continuing across the lower half of Australia’s eastern coast due to devastating bushfires, with potentially catastrophic conditions expected later this week.

More than a dozen towns in the states of New South Wales (NSW) and Victoria have been ordered to evacuate, including popular tourist areas and national parks, causing massive traffic queues and petrol and supply shortages.

There is growing global and celebrity support for bushfire fundraising efforts, with the reality TV star Kim Kardashian West among those lending support by sharing social media links on how to donate.
(Leakers.ng)

Saxon is a prolific writer with passion for the unusual. I believe the bizarre world is always exciting so keeping you up to date with such stories is my pleasure
Previous Woman Submits Dog Urine As Her Own During Drug Test
Next Most Expensive Pillows in the World, Number One Costs N64,000