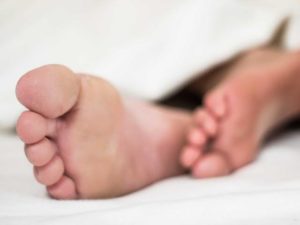 This sounds wacky for a criminal who should be looking for belongings to steal. No, this man’s interest is just sucking victims toes.
Florida police are warning residents to be on the lookout for a criminal who has a thing for toes. He just sucks on said toes.
A Bradenton man sound asleep in the early morning hours on Dec. 24 awoke to find a stranger sucking on his toes.

According to the police report, the man’s toes were in the stranger’s mouth when he was awakened from his slumber.

When asked by the victim what the man was doing, the stranger replied that “he was there to suck toes.”

The victim immediately began throwing punches at the stranger in an attempt to remove the man from the home. During the melee, the toe-sucking suspect claimed to have a gun and tried to fondle the victim’s “genital area,” according to The Smoking Gun.
The suspect fled the area after being pummeled by the victim, but not before he punched out the man’s front window and broke the windshield of his car after climbing atop the vehicle.

Police say the suspect was a bald male between the ages of 20 and 25 and stood about 5′ 11″ and weighed 160 pounds. If apprehended, the man will be charged with felony mischief.

Saxon is a prolific writer with passion for the unusual. I believe the bizarre world is always exciting so keeping you up to date with such stories is my pleasure
Previous Husband’s body found in dead woman’s freezer
Next Groom Plays Video Of Bride Cheating On Him With Brother-In-Law in Front of Wedding Guests (Watch Video)