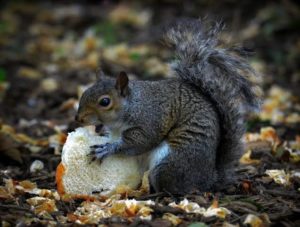 While a family was having fun in vacation during Christmas, a strange suspect was busy ransacking their home. Even when police arrived after the house alarm was triggered, the suspect still could not be found. The suspect is in fact, a squirrel.
The family says a squirrel trashed their home while they were on a Christmas vacation.

Kari and Dustin Drees said the alarms to their Atlanta home started going off while they were gone for a week over Christmas, but the police came and didn’t find anything wrong.

When the couple came back from vacation, the found wood chippings all around the floor, chewed-on baseboards and windows, and squirrel feces everywhere.

They believe the squirrel got in through the chimney and trashed their home as it tried to get back out, eventually making a nest in their couch. It even managed to turn on the hot water in the kitchen sink for several days.

“And this is where the squirrel had made its little nest,” Kari Drees said. “You can, like, see footprints and soot all over. It goes behind this mirror, there’s droppings all along the mantle. And when he saw the squirrel, (it) tried to run up the chimney. It couldn’t make it up the chimney, so he’s pretty sure that the squirrel fell down the chimney.”

“We don’t know if the squirrel had rabies, but we have a 9-month-old daughter, we want to be safe.”

Kari Drees said the couple’s home insurance won’t even cover the damages because “a squirrel is a rodent and not a vermin.”

The couple will need to repair furniture, windows, floors, walls, as well as have a professional cleaning.
They will stay in a hotel and with friends until they can return.

Saxon is a prolific writer with passion for the unusual. I believe the bizarre world is always exciting so keeping you up to date with such stories is my pleasure
Previous Shocker! More Nigerians Now Use Paracetamol To Cook Meat, See Why
Next Meet Migui Gabriel, The Man Who Claims He Lost 20 Pounds in 30 Days Playing Video Games