Home / Asia / Disturbed Man Drives Through Doors of a Church, Claims He Was Possessed (Video)

Disturbed Man Drives Through Doors of a Church, Claims He Was Possessed (Video) 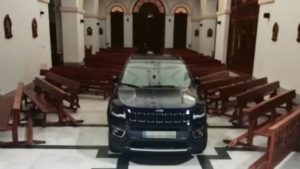 Entering the church for spiritual assistance is common, normal, and allowed. But the manner in which an individual enters the church might be a cause for concern even if the person claims to be possessed.
A 35-year old Spanish man was recently arrested after ramming his SUV through the wooden doors of a church so he could gain access inside. The man claimed he was pushed to engage in the bizarre act because he was pissed. H said the church was the only place where he could take shelter from his demonic “possession”.
The incident happened on January 8th. On that day the unnamed man reportedly drove up to the large doors of the San Juan Evangelista church, in the Spanish town of Sonseca, and started ramming his Jeep into it. At first passers-by didn’t really understand what was going on, and one woman, who thought the driver had been involved in an accident, walked up to the car to see if he was alright only to be scared away by having obscenities shouted at her.
As the woman apparently stunned, fumbled with her phone in a bid to call the police, the angry driver started ramming his SUV into the doors of the church until he finally broke through them. He then drove though the rows of wooden benches and stopped right in front of the altar. When emergency services finally arrived on the scene, they found the anxious man next to the altar. He allegedly told them that he was possessed and that was the only place he felt safe.

The unnamed man was convinced that it was safe to leave the church, and was later taken to the hospital to be tested for alcohol and drugs.
Reports have it that the unnamed man owns a shop that specialises in cannabis-related products, just 900 meters from the church.
He might not be in trouble if it is discovered that he consumed Cannabis because the substance is legal for cultivation and personal use in Spain. But he might face charges for the destruction of church property and trespassing.

It seemed everything was calm, according to interview by Castilla-La Mancha Media, as everyone looked to be in good spirits especially having realized that the incident didn’t leave anyone seriously hurt.

The church received quick assistance from the local community members. They helped the priest of San Juan Evangelista church to replace the broken doors, as well as some of the damaged wooden benches.
It seemed everything was calm, according to interview by Castilla-La Mancha Media, as everyone looked to be in good spirits especially having realized that the incident didn’t leave anyone seriously hurt.

Saxon is a prolific writer with passion for the unusual. I believe the bizarre world is always exciting so keeping you up to date with such stories is my pleasure
Previous Meet Migui Gabriel, The Man Who Claims He Lost 20 Pounds in 30 Days Playing Video Games
Next See photos of the 22 Italian Instagram models Manchester City footballers flew to Cheshire hotel to celebrate their 6-1 win against Aston Villa