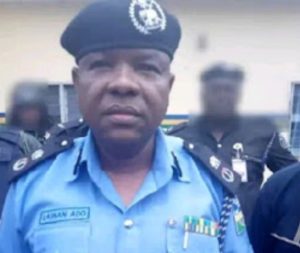 The Commissioner of Police in Kwara State, Lawan Ado, yesterday said the command had redeployed policemen at the Adewole Police Division in Ilorin, over an allegation against them.

Ado explained that some residents had alleged that some of the policemen in the division had been selling suspects detained at the station to ritual killers for N 80, 000 per person.

The CP said this during a visit of the District Governor, Rotary International, District 9125, Mr. Mbanefo Nnoka, and his team to the command headquarters.

He disclosed that, although the allegation was false, unfounded and untrue, the command redeployed the policemen to avoid needless rift.
He added that no one had come forward with information and evidence to indict any police officer in the state for selling suspects to ritual killers.

According to him, “But we have been redeploying the policemen there. More than half of them have now been transferred and soon, the other half will be redeployed so that even if there is anybody who is involved – which no information has established – we will at least remove him from the area.”

Nnoka who oversees Rotary Clubs in 23 states and the Federal Capital Territory, Abuja, said Rotary had spent about $ 7.3 billion globally and N 300 m in Nigeria to fight polio.

He urged parents to continue to immunize their children against polio, saying it was sad that there was still some resistance against polio immunization in Nigeria.

He urged Nigerians to cooperate with the police to fight crime, adding that policemen were friends of Nigerians.

Saxon is a prolific writer with passion for the unusual. I believe the bizarre world is always exciting so keeping you up to date with such stories is my pleasure
Previous Nigerian couple wed in isiagu suit and wedding gown (photos)
Next Man Fakes Own Kidnapping so He Won’t Attend His Wedding