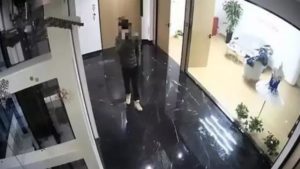 Some people get along with a girl but develop cold feat for one reason or the other when they are told tom marry the girl.

A young man from Shanghai, China, decided to change his mind at the dying minute when it was time to marry her. He suddenly realized he didn’t want to spend the rest of his life with her, so he devised a plan to make sure he didn’t have to. The man, surnamed Chen, could have just told his partner that he had had a change of heart, but he couldn’t break himself to do that, so he came up with a strategy that he hoped would make the girl break up with him – he became a petty criminal and got himself arrested on purpose.

Social status and reputation are very important in Chinese society, so Chen thought to himself that his bride-to-be and her family would be so disappointed by the news that he had been arrested for theft that they would cancel the wedding arrangements on the spot, allowing him to walk away with a guilt-free conscious.

Earlier this week, Chen simply walked into a dance studio on Huashan Road, in Shanghai, and casually stole a Bluetooth speaker, knowing full well that the place was monitored by security cameras. His goal, after all, was to be identified and charged with theft, only he didn’t expect police to show up on his doorstep as fast as they did. When questioned about his motives, the man didn’t shy away from telling the officers the truth.

“My girlfriend wants to marry me, but I don’t want to marry her. I knew I would be caught. I actually wanted to walk away, but I was angry,” Chen said. “I knew you would find me, though I didn’t think it would be so fast.”

The amateur thief added that he chose the Bluetooth speaker – which reportedly costs around $290 – because he wanted it to be valuable enough to get reported to the police, but not too expensive as not to cause the owner too much heartache.

Saxon is a prolific writer with passion for the unusual. I believe the bizarre world is always exciting so keeping you up to date with such stories is my pleasure
Previous Son-in-law Impregnates Mother-in-law Who Came To Take Care Of Newborn Baby
Next Meet Xiaofeng, the 15-Year-Old Girl that Went Through Surgery to Look Younger