Top 10 Most Expensive Televisions In The World in 2020

With evolving technology televisions are becoming cheaper as assembling materials also become cheaper. More people are affording television these days. But wait a minute; you may not say this for every television out there. There are some unbelievably expensive probably because of the features they offer the users. These televisions perhaps can only be afforded by the super-rich people in the world who have some extra “loose” millions to spend and make themselves happier. What you see on the screens of this exceptionally expensive television definitely cannot feel the same as the ordinary ones. The money on them alone could probably have its own effect on the atmosphere. You may never know until you sit in front of such screens.

Here is the list of top 10 most expensive televisions in the world 2020; 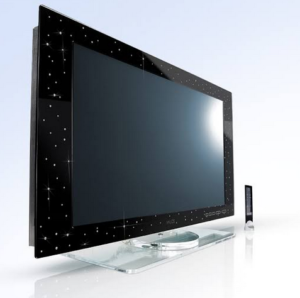 This might be the 10th most expensive TV on this least but certainly not the least exciting to have in your home. It is really precious with a sleek black frame which has 160 diamonds set into it for the ultimate bling. With a white gold plated stand to finish off the look, this tv is more like a jewelry display box which gives your apartment a special outlook and classy atmosphere. Despite the small-ish size of a forty-inch screen, this is still an impressive item to have as television. 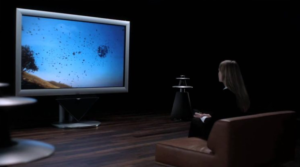 This television has reason to be expensive. It automatically readjusts its own colors every 120 hours just to make certain you get the best picture. It also has a minimalist aluminum frame. Looks really precious; something you would love to spend $140,000 for. 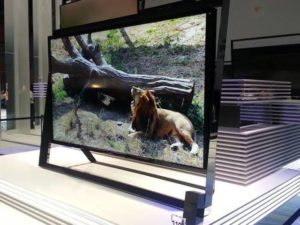 This is another very expensive television but with features that will make you want to have it in your home. The iconic frame stand design and the HD sound with the Ultra HD local light control make this extortionate offering almost worth the $152,000 they want for it. This television has a hundred and ten inch screen. It has voice and facial recognition and can read gestures. Imagine that; you just got yourself something special as television in your home. 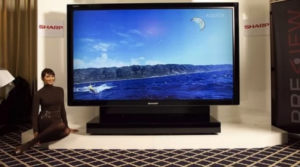 At number seven is Sharp LB-1085 LCD TV. You wouldn’t mind spending $160,000 to buy this masterpiece if you know what it’s made of. Of all the impressive screens on this list, this is the only one that offers round the clock use as a standard feature. It can be used all day, unlike others that overheat or degrade over time. This set has an impressive 176-degree viewing angle combined with Super View low-reflection black TFT LCD screen to ensure that you or anyone who might be viewing this television can see clearly what’s on the screen. You can see that what it offers is really worth the money you would cough out to buy it. 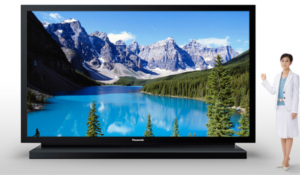 The Panasonic 152’’ Plasma TV was once tied as the largest TV screen in the world. It is twelve feet wide by five tall. It is the equivalent of nine fifty inch TVs and weighs in at a massive 1,272 pounds. The weight means special installation arrangements have to be made in advance. Unfortunately, you might need a forklift and a partially removed wall to bring home this TV. But when you check its wonderful features, the fact that you will enjoy what you watch in a manner you would, you won’t mind spending half a million dollars to buy it or even removing wall to send it into your home. 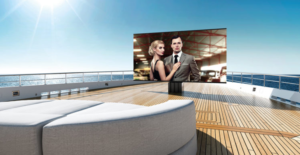 The C Seed Supermarine is the third most expensive TV in the world. It comes in two sizes, 144 inches, and 201 inches; both are designed to be retractable. The size difference has to do with how many panels the screen is made from, though the end results are seamless either way. C Seeds are designed for use on yachts and come standard with 180-degree rotation and glass fiber transmission for a distortion-free image. 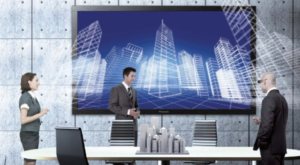 This is another masterpiece of a television to have though tailored to be afforded by the rich and classy. It has a 3d capability that most other oversize televisions don’t have. While most, or all the screens on the list of top 10 most expensive TVs have amazing sound and exceptional visual quality, no other screen in this size range can offer you a 3d experience that is so big you actually could step into the screen. This makes the Panasonic TH-152UX1W a true life acquisition. Makes you feel like you’re part of a reality show whenever you’re watching any programme. Wow, really cute. 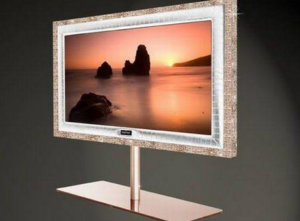 At $1.5 Million, Stuart Hughes Prestige HD Supreme Edition is the third most expensive television in the world. It is 22ct gold frame television and has 48 diamonds along with adventurine and topaz to give your room a real sparkle. Truly makes your room look and feel special. Don’t worry about what you’ve spent because you’ll definitely enjoy your favorite shows and movies in the most opulent way possible. Sounds pretty expensive but definitely worth it. 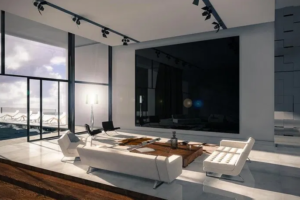 Titan Zeus is another special television which falls within the top 10 most expensive in the world, occupying the second position at $1.6 Million. It is also said to hold the title of largest screen anywhere. The Titan Zeus is the biggest television you can get. Everything is entirely custom built. Titan prides themselves on integrating the most up to the minute, top of the line technology into every set they make. Though the Zeus is the best commercial model they have, you can order a custom screen from this company, whether you want a waterproof TV to rise from a water feature or you need a curved screen to fit in a specific space, like on your yacht, they can accommodate any shape or size you can dream up. The TV comes with a 4K resolution and enables you to enjoy a quality screen picture display. You don’t have to worry about how much you’ve spend because this TV has astonishing features that will let you enjoy the results of what you coughed of your bank account. 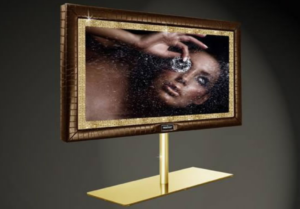 At number one is Stuart Hughes Prestige HD Supreme Rose Edition. It costs $2.25 Million (about N810 Million). Before you freak out just check this out; It has diamond tv buttons, 2,500 grams of dense 22-carat gold, 18-carat pink gold applied in the 28-kilogram splendid frame, and approximately 48 diamonds. Of course, this is a limited edition, but the good news is that you can order a matching phone case (out of stock) or even a diamond-encrusted golden laptop ($284135) to go with it. So you can really see this is truly.

Saxon is a prolific writer with passion for the unusual. I believe the bizarre world is always exciting so keeping you up to date with such stories is my pleasure
Previous Woman Wants to Divorce Husband Who Rarely Bathes
Next Most Expensive TV in the World Costs N810 Million