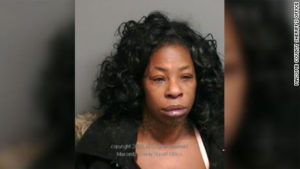 A Detroit Man is in the hospital recovering after a 52 year old woman bit his tongue for using  it to kiss her while they were making out.

According to Prosecutor Eric J. Smith, the woman, Youlette Wedgeworth, and the man were engaged in a consensual kiss on January 28 when the incident occurred. She had asked him to not put his tongue in her mouth. When he did anyway, she bit it off.

Police in responding to the incident which happened January 28,  found the man bleeding from his mouth, and recovered one inch of his tongue in his bedroom, the prosecutor’s office said in a statement to CNN.

“I believe this is the first case of this nature in my 27 years in the prosecutor’s office,” Smith said in the statement.

Wedgeworth has been charged with aggravated assault, a misdemeanor punishable by up to a year in jail and a $1,000 fine.

Saxon is a prolific writer with passion for the unusual. I believe the bizarre world is always exciting so keeping you up to date with such stories is my pleasure
Previous Most Expensive TV in the World Costs N810 Million
Next Couple Livestream Their Wedding to Guests From Quarantine to Avoid Spreading Coronavirus