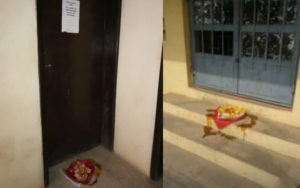 Staff and students of Ladoke Akintola Univeristy of Technology (LAUTECH) were stunned this morning after some items suspected to be a “sacrifice” were found in front of the office of a professor.
The fetish item was discovered this morning by students of the institution who raised an alarm. The sacrifice was reportedly placed in front of the office of Prof. A.A Akingbade, a senior lecturer in the faculty of Agricultural Science of the institution.
Prof Akingbade is also the current chairman of the Examination Malpractice Panel of the institution.
Another sacrifice was also placed in front of one of the classrooms in the university located in Ogbomosho, Oyo State.

Saxon is a prolific writer with passion for the unusual. I believe the bizarre world is always exciting so keeping you up to date with such stories is my pleasure
Previous Men Wanting to Be Taller Now Doing Limb-Extending Surgery
Next Man Kills Wife After She Asks Him For Recharge Card