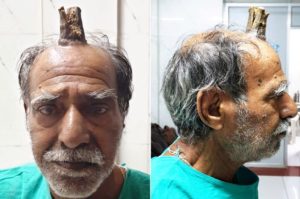 This sounds weird and creepy but an Indian farmer is currently feeling some relief after marathon surgery to make his head look normal again.

A 74-year-old Indian farmer has had a four-inch (10cm) devil horn removed from the top of his skull.

Shyam Lal Yadav, hails from Rahli village in Madhya Pradesh, India. He suffered a head injury in 2014 which reportedly led to the formation of a rare cutaneous horn.

This benign growth is also referred to as devil’s horn. It sprouted from Mr Yadav’s head and over five years escalated to the point where it towered above his skull.

What Mr Yadav used to do was to get the growth shaven down by his barber for years. But the horn began to grow aggressively, prompting the him to seek medical help.

The rare growths are made out of keratin, found in toenails and human hair, and mostly occur in older adults. 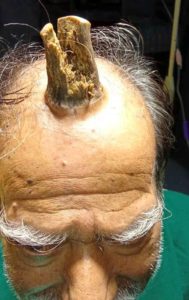 An operation to remove the growth was performed at Bhagyoday Tirth Hospital in Sagar city.

Surgeon Dr Vishal Gajbhiye said: ‘Around five years ago the patient had hurt his head after which a lump started growing.

“Initially, he ignored it as it did not cause any discomfort. Also, he got the growth cut by the local barber.

“But, when the lump hardened and started growing further, he approached the hospital at Sagar.  “As the horn is composed of keratin, the horn can usually be removed with a sterile razor. However, the underlying condition will still need to be treated.”

Mr. Yadav spent ten days in hospital recovering from the surgery and a biopsy of the growth confirmed the horn as harmless. 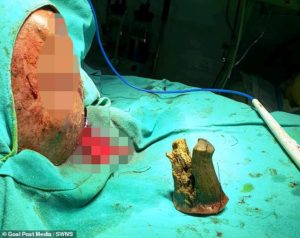 Dr. Gajbhiye added: “Treatments vary, but they can include surgery, radiation therapy, and chemotherapy.

“Immediately after its removal, skin was grafted on the wound which has now healed completely.”

Scientists have yet to find out the cause of horns, but it is believed that exposure to radiation or sunlight can trigger the condition.  Mr. Yadav is really a very lucky man. What a creepy story!

Saxon is a prolific writer with passion for the unusual. I believe the bizarre world is always exciting so keeping you up to date with such stories is my pleasure
Previous Japanese Company Sells Portable Do-It-Yourself Coffin to Keep Funeral Cost Low
Next TBoss weeps as she places a curse on Instagram troll who left a comment saying her child is ugly (video)