Home / Uncategorized / Medical Doctor allegedly attacked by Wife in Owerri, as she cuts off his nose, upper teeth, tip of tongue, lower gums, then calls his mother to come carry him

Medical Doctor allegedly attacked by Wife in Owerri, as she cuts off his nose, upper teeth, tip of tongue, lower gums, then calls his mother to come carry him 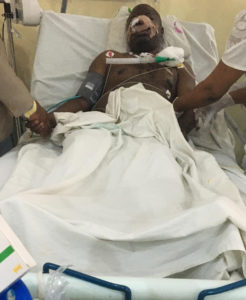 Tragedy struck in Owerri, Imo State capital after a medical doctor with the Federal Medical Centre (FMC) Owerri was allegedly brutally attacked by his wife on Tuesday night after a quarrel. He is now in critical condition and intensive care.

According to the victim’s friend, Jones, the doctor’s wife cut off his nose, upper teeth, tip of tongue, lower gums and after the assault, she called his mother to come carry him.

“A doctor in my center (fmc) Owerri was assaulted by his wife last night after a quarrel. The woman cut off his nose,upper teeth,tip of his tongue and part of his lower gums. She then called the guy’s mom to come and carry her son’s corpse.” said Jones.

“Luckily for the doctor, he was rushed to the hospital last night and we stabilized him.
He is conscious, but can not talk since he’s on tracheostomy. Now I’m scared of this marriage thing. My uni friend and personal physician just sent me this”? 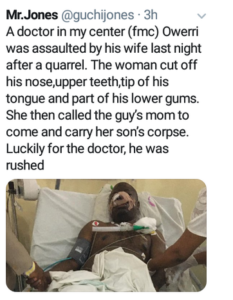 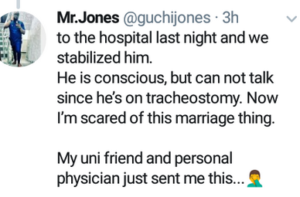 Saxon is a prolific writer with passion for the unusual. I believe the bizarre world is always exciting so keeping you up to date with such stories is my pleasure
Previous Benue community gifts 80 tubers of yam to serving corps member who erected a borehole water system for them (photos/video)
Next Chinese Woman Wears Giraffe Costume As Protection From Corona Virus (Viral Video)