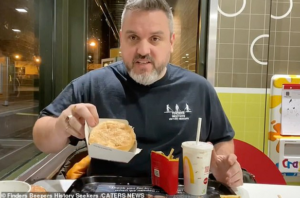 This is the wackiest way to celebrate birthday. A man is took the social media by storm for celebrating his birthday in the most bizarre way you can think of – eating MacDonald’s meal he buried in the ground for over a year.

The man who buried the Big MacDonald Meal in his friend’s garden finally dug it out 14 months later to eat as part of his landmark birthday celebration.

Matt Nadin, 40, from Barnsley, South Yorkshire had purchased a McDonald’s Burger, with fries and a chocolate milkshake in November 2018 from a local branch. 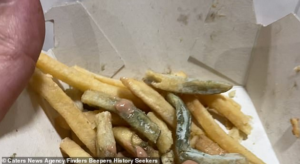 Matt Nadin, 40, from Barnsley, South Yorkshire who buried a Big Mac Meal in his friend’s garden for 14months has devoured it as part of his landmark birthday celebration

Before his 39th birthday, Nadin, who’s a father-of-three decided to place the meal in a Tupperware container and buried it into the ground at his friend Andy Thompson’s garden.

Nadin planned on digging out the meal for his 40th birthday which occurred in November 2019, but only recently found the right time to recover his buried meal. 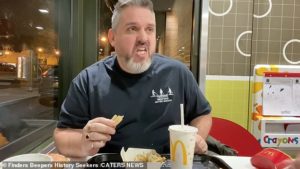 Matt Nadin had purchased and buried a McDonald’s meal, with fries and a chocolate milkshake in November 2018.

Tagging the weird stunt ‘McDonald’s 365 Challenge’, Nadin, a sales manager for a print company was stunned with his ability to eat the outdated food without falling sick. He confessed some portion was irritating but admitted some weren’t as bad as he anticipated. 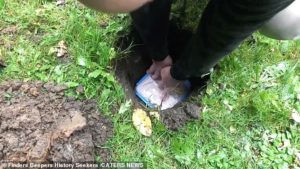 ‘The McDonalds chips were horrendous. There was no moisture in them. The burger wasn’t that bad, it was just soggy underneath and while the lettuce tasted bad, the meat was quite strong. The milkshake was a little fizzy and tasted strangely like a fruit smoothie.’ Nadin explained.

He continued: ‘I have eaten some bizarre things in my time and I recall seeing something where someone had to keep McDonald’s meal for years, so I reached a decision to take it further and eat it. I have engaged in weird food challenges since college, I suppose that’s where all of this originated from.’

Saxon is a prolific writer with passion for the unusual. I believe the bizarre world is always exciting so keeping you up to date with such stories is my pleasure
Previous Chinese Woman Wears Giraffe Costume As Protection From Corona Virus (Viral Video)
Next Five-Legged green tree frog undergoes leg amputation to survive