Indian man worships Donald Trump as his ‘god’, prays to him everyday 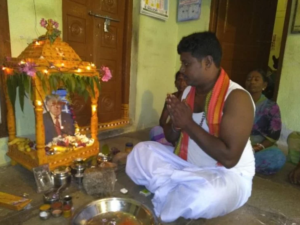 Donald Trump probably does not know he is not just the Presient of the United State but a ‘god’ to some people elsewhere.

An Indian man is so convinced President Trump is his “god,” he has a life-size statue as a shrine in his garden — and offers him daily prayers.

He also has a dream to meet with Trump someday.

“Instead of praying to other gods, I started praying to him,” Bussa Krishna said, calling the president “my god, Donald Trump.”

“My love for him has transformed into reverence.”

Krishna, 37, started worshiping Trump four years ago when he says he came to him in a dream, hiring 15 laborers to work with him for a month to make the 6-foot statue in his village in the southern state of Telangana.

“He is like a god to me, that is the reason I had his statue built,” he told New Delhi TV (NDTV) of his shrine showing Trump in a red tie and blue suit with his right arm raised in a wave. 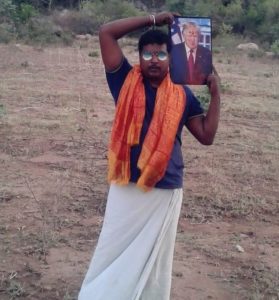 “Every Friday I fast for Trump’s long life. I also carry his picture and pray to him before commencing any work,” he told the station. 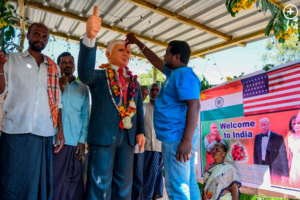 Krishna, who lives alone, is now known locally as Trump Krishna, and his statue-adorned house has been dubbed Trump House.

“The villagers never objected to it but appreciated his devotion,” his friend Ramesh Reddy told NDTV.

Saxon is a prolific writer with passion for the unusual. I believe the bizarre world is always exciting so keeping you up to date with such stories is my pleasure
Previous Woman Murdered By Boyfriend After Receiving Romantic Messages From Lover During Sex
Next Women boil used sanitary pads to get high – NDLEA