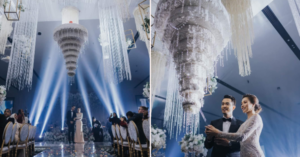 A couple has gone viral as photos and video of their unbelievably creative wedding cake surfaced online.

Malaysian actors Zahirah Macwilson and Aiman Hakim Redza’s wedding last Thursday was very special. The guests were probably not expecting an upside down wedding cake dropping from the ceiling.

The couple presented a gorgeous chandelier cake that was lowered down on a small stage for the couple to jointly slice. It was very impressive in deed. 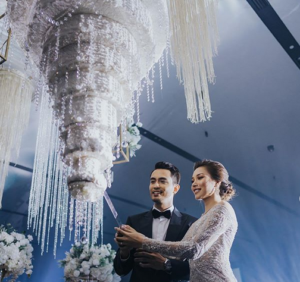 The now famous chandelier cake was the handiwork of  Lily & Lola Cakes, a Kuala Lumpur professional cake shop, and took about a week to make. Founder Lily Osman, 28, told New Straits Times that she had had the idea for a chandelier cake ever since 2017 and that this special event gave her and her sister the opportunity to make it a reality.

“It’s an idea that my sister Alya and I have been thinking about since 2017. Aiman’s and Zahirah’s wedding became our golden opportunity to put it into practice as it fitted their Rustic wedding theme,” Lily said. “We did the white cake in a week and then it took us an hour to hang it up like a chandelier. It was difficult and tricky, because cakes are fragile.”

The cake maker added that several people were required to fasten the cake onto the chandelier and make it look like the cake itself was a chandelier. Apparently, such an artistic wedding cake can cost up to 10,000 ringgit ($2,400).

“I’m glad that this wedding has made Malaysians realize that we can come up with creative cakes just like this one,” Lily Osman proudly said.

Saxon is a prolific writer with passion for the unusual. I believe the bizarre world is always exciting so keeping you up to date with such stories is my pleasure
Previous Woman Goes Blind After Getting Her Eyeballs Tattooed Black
Next Chinese Man Becomes Rich Live-streaming Himself Sleeping