Home / Europe / Meet Bernie Carroll, UK’s Most Opinionated Man Who Has Been Sending Angry Letters To A Newspaper Every Day Since 1978

Meet Bernie Carroll, UK’s Most Opinionated Man Who Has Been Sending Angry Letters To A Newspaper Every Day Since 1978 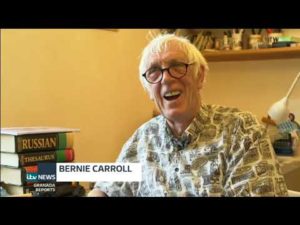 A70-year-old Liverpool man has earned himself a title as the most opinionated man in the UK for writing letters complaining about various things and sending them to the Liverpool Echo newspaper every day for the last 42 years.

Bernie Carroll has written over 15,000 letters. He has complained about various issues ranging from too much dog poo in his neigbourhood to disturbing fireworks. He can’t even remember the first issue he complained to the local council about in his very first letter; that was back in 1978.

It first started as a way to vent about the actions of the “militant council of the 1970s and 80s” in Liverpool, but once that was over with, he continued sending in letters complaining or offering suggestions about pretty much anything. For example, his most recent letters to the Liverpool Echo newspaper were about his frustrations at the constant fireworks in his neighborhood and dog poo bags being left on park railings.

“I’m the most opinionated man in the UK. There’s nothing I won’t have an opinion on,” Carroll proudly admits. “I know my letters probably won’t ever lead to any actual change or solve any issues, but it’s a cathartic experience for me. Writing gives me closure and I think it helps me cope with all the anger I have.” 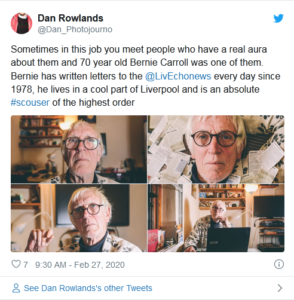 Although there are plenty of things he is unhappy about today, the 70-year-old says that it’s far better than in the 70’s and 80’s. He recalls feeling angry all of the time and the letters became an outlet to vent his frustrations. Nowadays, he complains about the most random things, like the rise in popularity of lip fillers and competitive eating.

“There is something deeply unedifying about cajoling young people into undergoing unnecessary cosmetic procedures in the interest of profit and it should be discouraged,” the former musician wrote in one of his letters. “Paying good money to look slightly like Mick Jagger is a strange way of improving one’s physical appearance.”

“Competitive Eating? Whoever invented this obscene abomination and why, when there are people in Yemen eating their pets and living off tree bark?” he wrote in another.

Bernie Carroll writes a letter to the Liverpool Echo every day, each containing around 250 words, but only three or four of them get published per week. The cathartic habit used to cost him a small fortune in postage stamps every month, but thanks to the internet, he can just email his letters to the newspaper, which he admits “has made being angry more affordable”.

“I’ve been writing letters longer than I’ve been with my wife, and I think writing them probably saved my marriage as I don’t have to pester her anymore,” Bernie told SWNS. I’ve got no children so maybe that’s given me more time to write letters. I don’t have time for children. I have never been able to commit to doing anything in my life other than the letters and my marriage.”

Saxon is a prolific writer with passion for the unusual. I believe the bizarre world is always exciting so keeping you up to date with such stories is my pleasure
Previous Iran temporarily frees 54,000 prisoners to combat spread of coronavirus
Next Coronavirus! Top Five Things Chinese People Are Doing That You Can Try