Home / Europe / Russian Theater Performing For One Spectator At A Time

Russian Theater Performing For One Spectator At A Time 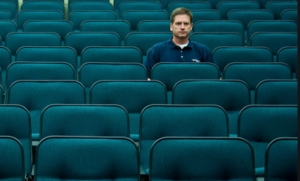 What you usually had was a solo performing artist but now a reverse will be the case. You will be having solo audience in a large theater.

Starting this month, Russia’s Perm Opera and Ballet Theatre will stream its performances online and allow just one spectator in the theater to watch in person.

Called “One-On-One,” the project is designed to create a new kind of interaction with the public at a time when a growing number of coronavirus cases are limiting outings and gatherings.

“We are ready to hold performances for one person because in the end … one spectator has the same value as a full house,“ Marat Gatsalov, the theater’s principal stage director, said in a statement.

The theater, located in Perm, an industrial city 1,100 km (680 miles) east of Moscow, said it would shortly be accepting applications for those wanting to attend the performances alone.

It said that one of the performers would choose thespectator in a draw, but that the chosen person would need to be screened by a doctor before entering the theater.

Russia has so far recorded 438 cases of the virus, as well as one coronavirus-related death.

The authorities have barred foreign nationals from entering the country until May in an effort to stop the coronavirus from spreading further, and have canceled or heavily restricted public gatherings.

Saxon is a prolific writer with passion for the unusual. I believe the bizarre world is always exciting so keeping you up to date with such stories is my pleasure
Previous British vicar catches fire waiting for God’s answer
Next Canadian band performs record-breaking concert below sea level