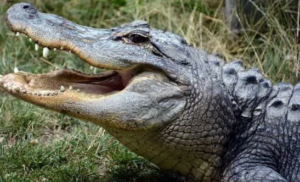 A Zimbabwean woman has proved that mothers can go to any length to save their kids.

In a show of bravery and quick-thinking that is being applauded by many, the mother from Zimbabwe rescued her toddler from a crocodile by jamming her fingers up the reptile’s nose. According to The Mirror, the incident occurred when Maurina Musisinyana left her two children playing under an umbrella on the banks of the Runde River while she went fishing nearby.

The 30-year-old was soon alerted of danger when she heard a scream and saw her three-year-old son Gideon being attacked by a crocodile.

According to The Guardian, Maurina rushed back to the river bank and jumped on the crocodile. She then used her fingers to block the reptile’s nose, forcing it to relax its grip on the boy while she used her other hand to free him. She was able to snatch her toddler away, but not before the crocodile managed to bite her hand.

The boy was rushed to a nearby hospital with facial injuries and bleeding. He has since made a full recovery.

Speaking about the incident, Maurina, who belongs to the southeastern town of Chiredzi, said: “I pressed its nose hard, a tip I learnt from the elders long back.

“If you suffocate a crocodile from its nose it loses its strength and that is exactly what I did. I used my other arm to free my baby’s head from its jaws. Even to this day, I still do not believe I rescued my son.”

The Runde River in Zimbabwe is populated with Nile crocodiles that can grow up to as much as 20 feet in length.

Saxon is a prolific writer with passion for the unusual. I believe the bizarre world is always exciting so keeping you up to date with such stories is my pleasure
Previous Meet Ssoyoung, The South Korea YouTuber Who Eats Live Sea Food For Fun (Unbelievable Video)
Next Rusty Knife Blade Removed From Man’s Head 26 Years After He Was Stabbed