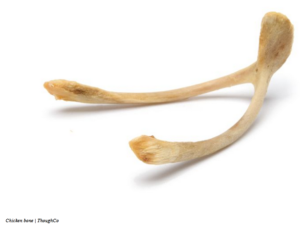 In this season of COVID 19 pandemic any form of cough could scare people aware. But a Chinese woman’s persistent cough is actually because of very wacky reason.

The 22-year-old Chinese woman who suffered from a persistent cough left many surprised after it was discovered that she had a piece of chicken bone lodged in her lung.

The unidentified Chinese woman had been suffering from persistent coughing for the last 14 years. After 14 years of checkups and X-rays, she recently learned that it had all been caused by a chicken bone.

Her dilemma is traced back to when she was seven or eight years old and suffered a serious coughing fit but several hospital visits could not identify the cause of her cough.

She continued to seek medical help due to the coughing fits and breathing challenges she was having. She took antibiotics for years and was even misdiagnosed several times. 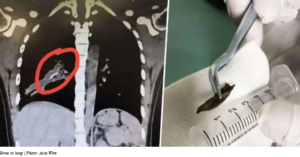 Luck shone on her when she scheduled surgery for hyperhidrosis (hyper sweating) but doctors had to run some tests to make sure she was healthy enough to be operated on. That’s when her respiratory problems came up, so Wang Jiyong, Deputy Head of Cardiothoracic Surgery at the First Affiliated Hospital of Guangzhou University of Chinese Medicine, ordered a set of CT scans.

The scans revealed what looked like a foreign object lodged in the patient’s right lung, so surgeon Yang Ming decided to perform a bronchoscopy to identify it. The 30-minute procedure involved a tube with a light and small camera at the end being inserted through her mouth, down through the airways all the way to the lungs.

Dr. Ming managed to find the mysterious object in the woman’s right lung and then retrieve it with the bronchoscope. It turned out to be a chicken bone fragment about 2cm-long.

Upon hearing the news, the shocked patient told doctors that she had no idea how the bone had ended up in her lung, but doctors said that it was likely inhaled by accident, during her childhood, probably when she had that first coughing fit that started it all.

Saxon is a prolific writer with passion for the unusual. I believe the bizarre world is always exciting so keeping you up to date with such stories is my pleasure
Previous Indonesia locks quarantine violators in ‘haunted house’
Next Woman wrestles attacking fox into scalding pot