Woman killed by alligator as she tried to touch it 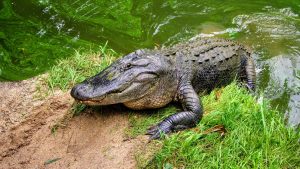 A woman killed by an alligator on South Carolina’s Kiawah Island last Friday walked over to the reptile and even tried to touch it before the fatal attack, a witness told investigators.

The new details were part of a follow up report from the Charleston County Sheriff’s Office.

According to the witness, 58-year-old Cynthia Covert was at the witness’ house to do her nails. She said that Covert was not acting like herself – she was more talkative and relaxed than usual. When deputies asked if the change in behavior may have been alcohol or drug induced, the witness noted that “Covert came to her residence with a glass of wine, but that was the only thing she saw.”

As indicated in previous reports, Covert saw the alligator and went down to get a closer look, despite the protests of the homeowner and her husband.

This report reveals that the alligator had “grabbed a deer” from the same spot just days before. When the witness warned Covert, Covert replied “I don’t look like a deer” then attempted to touch the alligator, at which point it grabbed her by the leg and dragged her into the water.

In addition to trying to fend the alligator off with a shovel, witnesses tried to throw Covert a rope and pull her ashore.

One witness told deputies that “Covert was about waist deep in the water and she stated in a very calm voice ‘I guess I won’t do this again’ as they tried to pull her from the water.” At that point, “the alligator took her under the water and she released the rope.”

When responders retrieved Covert’s body, it was “intact with severe wounds to her leg.”

The Charleston County Coroner determined the cause of death as drowning.

Saxon is a prolific writer with passion for the unusual. I believe the bizarre world is always exciting so keeping you up to date with such stories is my pleasure
Previous Abuja pastor, church workers jump fence to avoid being arrested over lockdown violation
Next Chinese company forces male employees to put on pantyhose, dance around office after failing to reach sales targets