Skydivers Crash to Ground After Parachute Malfunction In Horrifying Video

A horrifying video has captured the moment two skydivers spiralled to the ground after a parachute malfunction. Footage from the incident in Titusville, Florida shows the skydivers barreling toward the ground before they crashed in the front yard of a home.

According to the Titusville Fire Department, the men were treated at the scene before being flown to a trauma center on Wednesday morning. Fire Department Battalion Chief Greg Sutton told CNN that they were “alert and conscious” after the skydiving accident. A news release by the City of Titusville  says the men are in critical condition after they experienced a “parachute malfunction”.

“We just watched them go down over the tree line, it was nothing you could do,” Christina Renfore, who witnessed the incident, said to Click Orlando. “He went into a pretty nasty spin. At first we thought he was having fun and showing off, but it was pretty evident shortly after they were in trouble.”

She also shared footage of the crash on Facebook, along with the caption: “They hit the ground and hard.This was a tandem jump gone horribly wrong!” 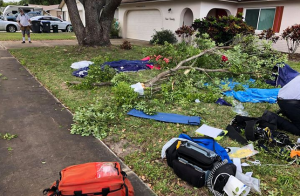 The skydivers struck a tree in the front yard as they crashed. Photos shared on Facebook by the Titusville Fire Department show their blue parachutes tangled with a tree branch. The photos also show the medical chopper that transported them to hospital.

The victims – who have not been named – were part of a tandem jump from a plane that originated at Dunn Airport, preliminary investigation has revealed. The incident remains under investigation by the Titusville Police Department.

Saxon is a prolific writer with passion for the unusual. I believe the bizarre world is always exciting so keeping you up to date with such stories is my pleasure
Previous Father devastated after a DNA test revealed that one of newborn twins isn’t his
Next 13-Year-Old Girl Claims Her 10-Year-Old Boyfriend Got Her Pregnant