Home / Uncategorized / Over 1.8 Million People Join Facebook Group Where Everyone Pretends They Are Ants (Video)

Over 1.8 Million People Join Facebook Group Where Everyone Pretends They Are Ants (Video) 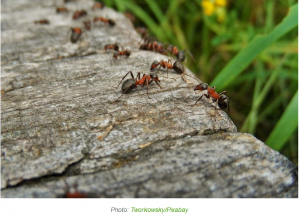 This sounds wacky but it is very interesting too. Checkout it ‘human’ ant colony where people are having fun existing as ants. You would believe how interesting living as an ant is.

“A group where we all pretend to be ants in an ant colony” has emerged and is growing very fast. This is one of the weirdest Facebook groups ever created. The group has about 1.8 million people pretending they are ants and worshiping their queen.

Facebook’s now famous “ant group” is a perfect example of what the lockdown over the fight against Covid-19 has caused. This group was created in June of 2019, and it got a respectable 100,000 members in march of 2020, but then the Covid-19 pandemic started wreaking havoc everywhere prompting social distancing and isolation measures, and the number of members skyrocketed to over a million in less than two months. At the time of this writing, the Facebook group where everyone “worships the Queen and do ant stuff” has over 1.8 million members. 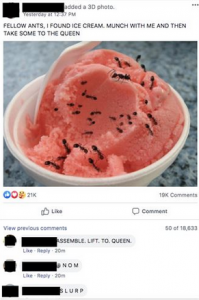 Apart from the general idea of a group of humans pretending to be ants online, the main draw of this online community is the opportunity to escape all human issues and escape the stress and worried of daily life.

There are several rules that members of the group must abide by and one of them is never to discuss politics of human issues in general. The group is all about being an ant, helping the colony, and above all, worshiping the Queen. The group has become so popular these past couple of months that its moderators have been struggling to keep up with new member requests.

“We have so many user requests and pending posts that this has become a job for me,” Tyrese Childs, the group;s creator, told NBC. “I think people are searching for something to do right now. You can only scroll so much on social media.”

May me you’re wondering what goes on in a Facebook group where nearly 2 million people pretend they are ants in a colony, perhaps this photo of some ants crawling on a cup of ice-cream will give you some idea. It got 18,000 comments from the group’s members, most of which read  “NOM,” “SLURP” or “LIFT.TO.THE.QUEEN.”

Another unique feature of the group is that all members have to refer to fellow colony mates as “Ant-their real name”? This means that you add ‘ant’ as a title before mentioning anybody’s name. This sounds wacky but it sure gets people’s minds off things, and that’s all that matters.

“The ant group sounds like a psychologically safe space to meander with nothing scary and nothing political and nothing coronavirus-related,” Andreas Lieberoth, an assistant professor of media psychology at Aarhus University in Denmark, said. “I don’t know if ants get COVID, but in this colony, they don’t.”

You might have to join this group for a while and change your life style if you’ve become so bored with the fears and stress of normal life. At least, they have nothing to worry about Covid-19.

Saxon is a prolific writer with passion for the unusual. I believe the bizarre world is always exciting so keeping you up to date with such stories is my pleasure
Previous South Korean Man Has Been Training by Banging His Head Against a Tree Every Day For Five Years (Video)
Next See creepy art work called “The Silent People” which is freaking people out (video)