Home / Uncategorized / Meet ‘Gus’ The Rat Whose Paintings Have Earned Over 1,000 Pounds (Photos)

Meet ‘Gus’ The Rat Whose Paintings Have Earned Over 1,000 Pounds (Photos) 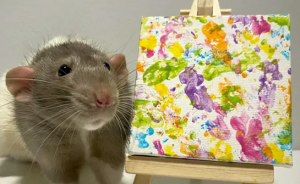 Owning a pet rat has become a viable economic decision. This story proves that.

Gus is not an ordinary rat – he’s a rich rat and the owner is really proud of this rodent.

The little rodent has managed to earn a lot of money simply by doing something he likes – painting. Gus uses his paws to create miniature masterpieces that have been sold worldwide for more than 1,000 pounds – or over Rs 92,000. 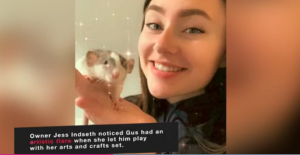 According to The Sun, Gus the rat first showed an inclination towards art when owner Jess Indseth let him loose with her arts and crafts set. The 19-year-old from Manchester placed the rodent on some paper with paint on his paws and was pleasantly surprised to see the result.

To nurture the little artist’s talent, she bought non-toxic paints and mini canvases on which Gus could work his magic. 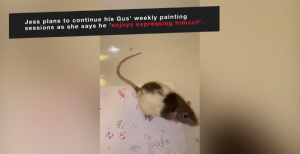 Jess – who also has four other rats – then put the artwork for sale at online marketplace Etsy and was inundated with orders. For 20 pounds a canvas, she found customers in countries as far away as South Korea and Australia.

“Gus is like a mini Matisse,” said Jess to news website Real-Fix. “I love his artwork and lots of people across the world too. I was shocked to find there was a market for rat paintings – but it’s amazing. 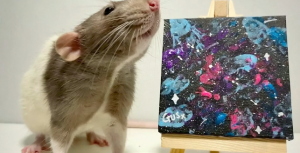 Photos show Gus busy at work, scurrying over canvases to create colourful artworks and looking on proudly at completed masterpieces.

Saxon is a prolific writer with passion for the unusual. I believe the bizarre world is always exciting so keeping you up to date with such stories is my pleasure
Previous Hong Kong shop offers ‘tear gas’ flavor ice cream to show support for protests
Next Two Long-Lost Dog Siblings Become Internet Celebrities as they Hug ‘Emotionally’