Home / Uncategorized / Meet Eris, Dog with the longest mouth in the world (Photos)

Meet Eris, Dog with the longest mouth in the world (Photos) 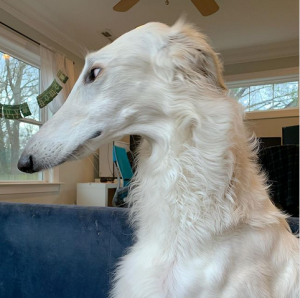 Dogs are loved by their owners for different reasons. Some look because they’re gorgeous and some other because they’re vicious. Well, one dog owner is cherishing her dog because the dog is an internet celebrity. Find out why.

The internet is excited over photos of two-year-old Eris, a white Borzoi Sighthound from Richmond, Virginia, who has become an internet sensation for her unusually long snout. Ever sine Eris’ owner, Lily Kambourian, posted a photo of her nose from an angle that really showed how incredibly long it was, people have been fascinated by her schnozzle. 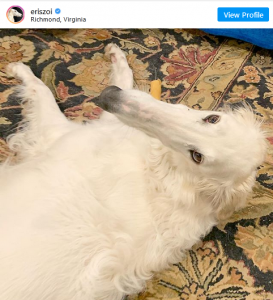 Lily says that it was quite obvious that Eris and her siblings had an overbite (a genetic defect) since they were only puppies, but she didn’t care, and she certainly never expected this to become her most popular trait.

“Eris was born to a litter of three in Keysville, Virginia. When we went to go visit the puppies, it was apparent they might have an overbite,” Eris said. “This would rule them out for any dog shows as it is a genetic defect. But that didn’t bother us. She came right up to us and sat on my partner’s lap.”

Lily further says that they get stopped by strangers whenever she goes out for walks with Eris. So she could decide to do the dog walk on an empty streets just so they can actually take a few steps without someone asking what breed Eris is. 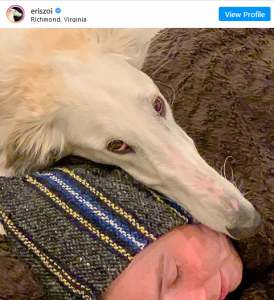 Eris, whose name translates to “fast” in Russian, measures four-feet-nine-inches from the tip of her nose to the end of her tail, with her snout alone measuring a whopping 12.2 inches (31 centimetres).

“We were warned when she was a puppy that she may be having dental issues, where the teeth would poke into the gums and she may have needed canines removed,” Eris’ owner said. “But she just sort of grew past it. There are no issues from her long nose, she drops food everywhere but so do I.”

Though Eris’s title as the dog with the longest snout in the world is not official, Lily says she wouldn’t mind seeking out record keepers, just out of curiosity.

No matter what the outcome of the record check is, whether the dog has the world’s longest snout or not, Eris’ is already an internet sensation with hundreds of thousands of Instagram fans that like her looks.

Saxon is a prolific writer with passion for the unusual. I believe the bizarre world is always exciting so keeping you up to date with such stories is my pleasure
Previous The World’s First Gold-Plated Hotel is in Vietnam
Next This Toy Rolls Royce SUV Car Costs N12 Million, has luxury accessories like the real life version