The World’s First Gold-Plated Hotel is in Vietnam 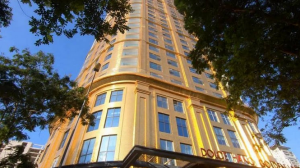 There are several exotic hotels across the world but one that should be in your list of must-visit  locations is Hanoi 6-star hotel which is the first hotel in the world to have a 24K-gold-plated exterior and interior.

Hanoi Golden Lake hotel has been under construction for over a decade but will be completed by the end of this year. The exterior is already almost one hundred percent completed, with just the final details left to be added, and the building is already attracting attention because of its unusual decor.

The impressive edifice is a 6-star hotel completely covered in Japanese-imported ceramic tiles infused with real 24K gold, and according to developers, patrons can expect more shiny gold decor on the inside as well. 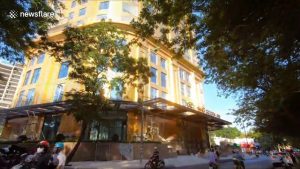 You may be wondering whether the Hanoi Golden Lake is the world’s first ultra-exclusive hotel in the world. No, it is not. Even in the city of Hanoi, it is not even the first. But it is exceptional because, according to Hoa Binh Group, the company behind the project, this is the first hotel in the world to have both the exterior and interior covered in 24K gold. Apart from the gilded exterior, it has a gold-plated lobby, as well as gold-plated furniture, sink, bathtub as well as a series of decorations and accessories covered in 24K gold.

“As tourism has been identified as the spearhead of the local economy, the sector must have unique product to attract visitors. The Hanoi Golden Lake will become a place not to be missed in this sense,” the general director of the Hoa Binh Group told Vietnam Insider.

Dubai’s Burj Al-Arab hotel is famous for its 22K gold-plated elevator & lobby, Emirates Palace in the UAE has a gold-painted ceiling and walls, the Trump International Hotel Las Vegas has gold-infused windows that glistens in the sunlight, but the Hanoi Golden Lake hotel wants to one-up them all by implementing the opulent, gold-based theme both on the outside and the inside.

Despite being development since 2009, the Hanoi Golden Lake hotel only recently started drawing the attention of passers-by, as its gilded exterior made impossible to ignore.

People can actually get to check out the interior gold furnishings at least $250 per night otherwise for now what you can do is to admire it from the outside.

The 25-floor of the building has a number of apartments that will also be sold for about $6,500 per square metre. But the owners will not be able to live there permanently, but rent out the apartments through a rental agency to ensure quality consistency.

This is really someplace to checkout whenever you find yourself in Vietnam.

Saxon is a prolific writer with passion for the unusual. I believe the bizarre world is always exciting so keeping you up to date with such stories is my pleasure
Previous Allowing people fart into your face protects you from cancer, study finds
Next Meet Eris, Dog with the longest mouth in the world (Photos)